Facts about the incident deliberately hidden now made public 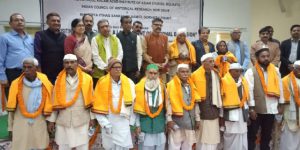 A unique effort to search for and fill the forgotten and lost pages of India’s freedom struggle has begun. A two day seminar on India’s freedom struggle was organised at the Deendayal Upadhyay Gorakhpur University. The seminar was a joint effort of Itihas Sankalan Yojana and Indian Council of Historical Research (ICHR) under the aegis of Maulana Abul Kalam Azad Institute of Asiatic Studies, Kolkata. The seminar was successfully organised due to the efforts of Prof. Himanshu Chaturvedi.

The most unique and prominent part of the seminar was the felicitation done to the families of the martyrs of Chauri Chaura for the first time since India attained independence. The family members were called on stage and awarded which was a emotional moment for all. 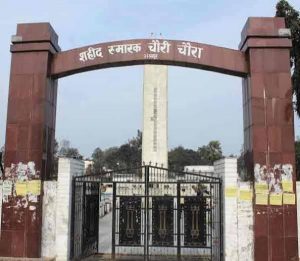 The Chauri Chaura incident is a chapter in the history of the Indian freedom struggle about which concerns have been raised time and again. The reason for these concerns is that several facts related to the incident have been lost. From Jallianwala Bagh to Chauri Chaura, many facts have been concealed or deliberately hidden by the so-called eminent historians who did not even attempt to write about these unknown facts.

Gandhiji’s Champaran Yatra during his visit to Purvanchal is always highlighted in the making of the Mahatma but no one tells as to why did Gandhiji withdraw the non-cooperation movement soon after the Chauri Cahura incident. ‘Swadesh’, the only newspaper which was published at that time from Gorakhpur, has written a lot on the incident but not much work has been done about it till now. Dasharath Dwivedi, then Editor of Swadesh, was not given his rightful place in the history of journalism and even Gorakhpur itself does not remember him today. In such a situation, the efforts of Prof. Himanshu Chaturvedi who has taken the courage to bring out facts in this regard is truly commendable. Now there is hope that those parts of our history which were deliberately hidden by design will be brought forward so that our current and next generations will know about the true facts of our historical events.

Prafulla Ketkar delivered a fascinating speech on the occasion. He stressed on the fact that the period from the incident at Jallianwala Bagh to Chauri Chaura has a lot of facts tucked in between.

In fact, the truth about Chauri Chaura is only emerging out now. The facts about the police brutality before the burning of the police station is now being recorded in history. The facts about how scared the British establishment and the then national leadership were after the Chauri Cahura incident will also be part of history now. It also shows how the big leaders capitulated and weakened the fight and Mahamana Madan Mohan Malaviya was left alone. It reveals how such an important stage of our history was made insignificant and why it took 45 years to recognize the families of those who were hanged for the Chauri Chaura incident as freedom fighters. New facts also show that the governments’ post-Independence were themselves confused about the incident.

The true visualization of the history of India’s freedom struggle has just begun. This is gratifying because now the illusion that India got independence only by non-violence will be broken. The true history and the heroic saga of our freedom fighters will be known to all which was hidden due to a planned agenda from the pages of our history. Efforts of Prof. Himanshu Chaturvedi deserve our applause and congratulations. 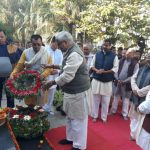