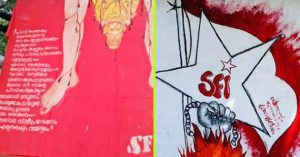 Endorsing the women entry into Sabarimala temple, the student’s union leaders depicted Lord Ayyappa in between the legs of a bleeding woman! The writings on the board read: Ayyan (Ayyappa), Father, You and I, all born through the same way……

The college is owned by the Kochi Devaswom Board, a Hindu religious trust appointed by the Kerala Government to look after Hindu temples in central Kerala! As protests mounted from all quarters, the board has been removed from the campus.

It is not the first time the SFI has insulted Hindu faith on the campus of Kerala Varma college. In 2017, they used the posters depicting Goddess Saraswati in the nude, the painting by MF Hussain.