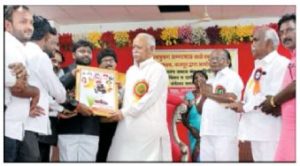 Nagpur. “ALL segments of Hindu community need to reach out to each other and stand united. And, various groups are coming together in this direction, said Dr. Mohan Bhagwat, Sarsanghchalak of Rashtriya Swayamsevak Sangh (RSS).

In his speech, RSS Sarsanghchalak said that RSS believed in unity of Hindus. “Hence, RSS never organized programmes for smaller groups. It organises Hindus as a whole. After Independence of India, divide between various social groups widened, but now Hindu community has realised this and efforts are onto bridge the divide,” he said.

To bridge the social divide, RSS is organising various programmes. As part of its celebration of 3rd Sarsanghchalak Balasaheb Deoras birth centenary, RSS is taking up a programme to convey the message that water, temple, and crematoriums should be common for all castes and social groups, he said.

Referring to the lament of Matang community that it had remained a neglected lot despite being in Scheduled Castes, Dr. Bhagwat Ji said that education and unity would yield results for them.

Though RSS was not a political organisation, he said, it would convey sentiments of Matang community to the people in the Government and politics. He asked Matang community members to be in touch with RSS workers in respective areas.

Sucheta Kawale conducted the proceedings and Yogesh Dhankasar proposed a vote of thanks.