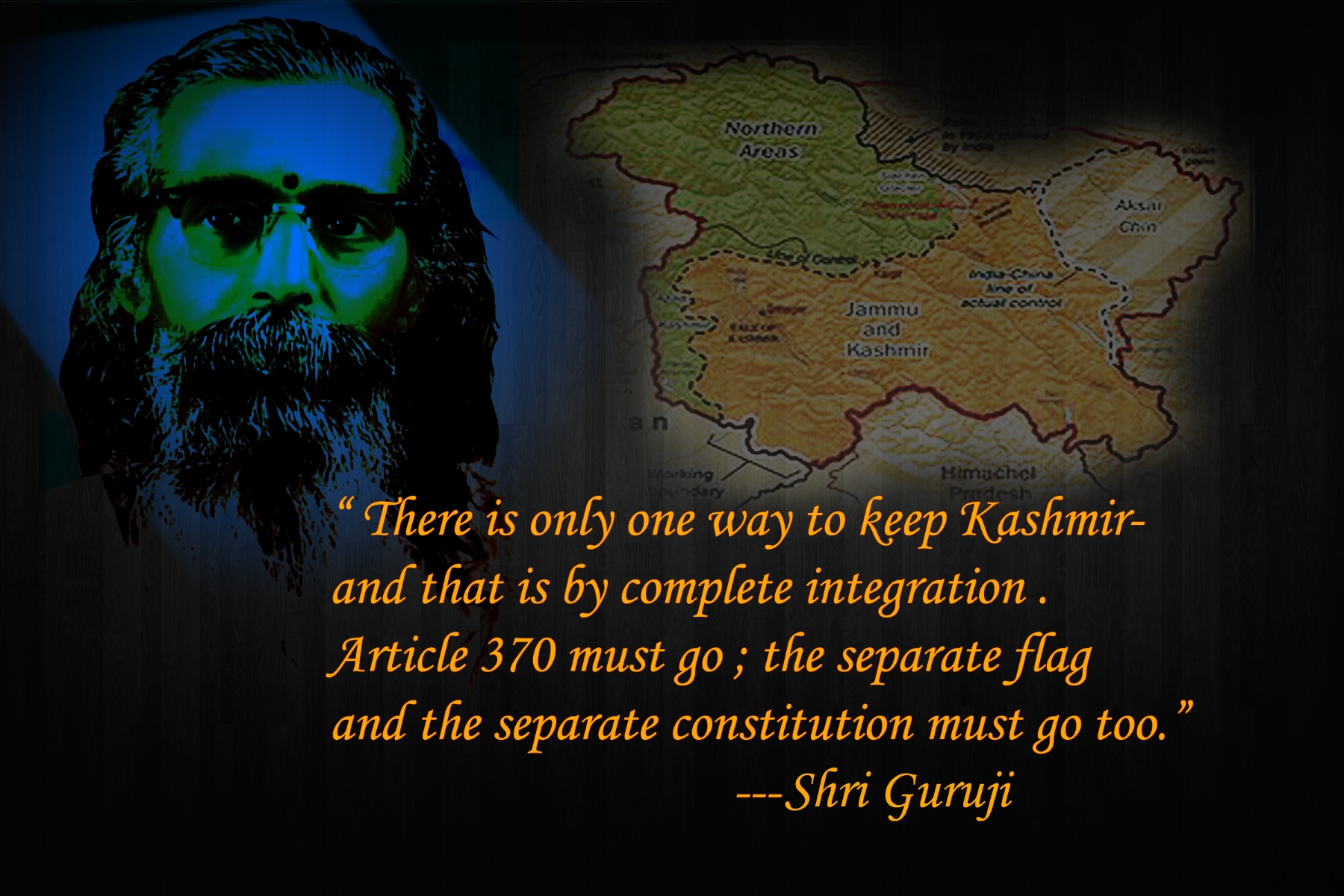 Following are the views of Pujaniya Shri Guruji, the 2nd Sarsanghachalak of RSS, on the issue of Jammu and Kashmir, expressed on various occasions…… 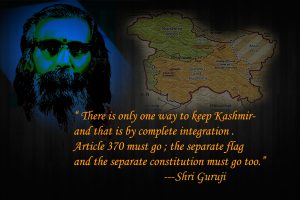 Government does not seem to know what is to be done next in Kashmir. It does not want to lose Kashmir and it does not know how to keep it!

Ans. There is only one way to keep Kashmir – and that is by complete integration. Article 370 must go; the separate flag and the separate constitution must go too. If it is necessary to have, President’s Rule is a temporary thing. Within a year or two there will have to be fresh elections. And the new Vidhan Sabha may be more rabidly communal than the present one.

What will the world say?

Ans. We must decide what are our vital national interests and then proceed to safeguard them. We must not bother too much about so-called world opinion. Do you think it is favorable to you even now? Did this ‘world opinion’ favor you over Junagadh or Hyderabad or Goa? Bharat must be governed by Bharat’s interest and not at the bidding of foreign opinion, which is only a reflection of foreign interests.Some time back the London Times correspondent in Delhi met me. He asked me, what I thought of the Presidential election in our country. I told him a new President (Dr. Zakir Husain) had been elected and I had nothing to say about it. But he persisted and said that some religious leaders had criticized his election. I told him, “So what? When Edward VIII wanted to marry Mrs. Simpson, the secular British dethroned him for wanting to marry a Roman Catholic!” These people come and lecture to us on the virtues of secularism! We must take their opinion with more than a pinch of salt. I say if we don’t integrate Kashmir, and lose it, this very world opinion will call us fools. To formulate policies on the basis of the world opinion will be like repeating the story of the old man, his son and his donkey.

Do you think a Sikkim style status for Kashmir Valley will work? Some people think that Kashmiris do not really want to go to Pakistan; that will be their undoing.

Ans. It will not work. It is not working well even in Sikkim too. It was said of the Sindhi Muslim also that he was not communal, and that he did not want Pakistan. But all the same he voted for the creation of Pakistan. There is therefore no reason to believe that this Sikkim status for Kashmir will not be a half-way house to Pakistan. We should entertain no illusions in this regard. Sheikh Abdullah himself was willing to accede to Pakistan. He did not, only because Mr. Jinnah did not accept his terms!

(With Pressmen at Bangalore, November 1965)

How do you view the ceasefire line in Kashmir?

Ans. If you say that Kashmir is ours, the portion of Kashmir which is in the hands of Pakistan should be taken back. A prominent leader is saying that we should give away part of Aksai Chin to China and make friends with China, in order to face Pakistan. The same gentleman had advocated the giving away of Kashmir to Pakistan during the time of Chinese aggression. Just imagine, if this process of giving away a part of our country whenever either of the country invades us continues, what will be our fate? Where would we be?

Either in Pakistan or China!

Ans. We will be in the bellies of the fish in the vast Indian Ocean or Arabian Sea!
Therefore a line has to be drawn somewhere. That line was drawn in 1947 by creating Pakistan. But Pakistan has not cared for the so-called ‘international boundary’. It continues to violate it. That should not be tolerated. It should be taught a lesson.

One of our esteemed leaders has said that our stand on Kashmir has been wrong always. According to him we should view the problem in the light of Junagadh and Hyderabad. In the case of the above two, the people, i.e., Hindus being in a majority opted to join Bharat, whereas the ruler, a Muslim, wanted to accede to Pakistan. Then we supported the cause of the people and ultimately people’s wish was made to win. In the same way we should view the case of Kashmir and give it away to Pakistan as it is having a majority of Muslims. Surely this argument appears quite logical.

Ans. But the fact is, the people’s wish was opposed by the rulers in Junagadh and Hyderabad. Whereas in Kashmir, the National Conference, the major political party, and its Constituent Assembly which was the representative body of the entire people had unequivocally decided to join Bharat. The ruler also opted for Bharat. Therefore there is no question of any rift between the wishes of the people and the ruler. And the question of joining Pakistan did not arise at all.

What about the earlier resolution of UNO that there should be plebiscite in Kashmir if need be?

Ans. Where is the need now? Definitely we do not need it. The prerequisite for plebiscite such as withdrawal of Pakistani forces from the occupied Kashmir etc., have not been met with.
Secondly they in UNO have kept all their resolutions in cold storage all these years. They have not tried to implement them. Under such circumstances, they have no right to discuss other matters.
I have a definite charge against the UNO. The observers of UNO are there in Kashmir. In their presence the infiltrators have entered Kashmir. What was their duty? What did they do? Did they name them? General Nimmo has told that he knew that armed men have entered Kashmir. But nothing was done to check them. In such circumstances you cannot expect justice from that body.

After all, it is not a judicial body. It is a political body.

Ans. Yes. It is not only a judicial body, but an organization formed by the big nations to serve their political interests.

(With Pressmen in Bangalore, February, 1973)

Do you see anything new in the recent declaration of Sheikh Abdullah that he does not question the Constitution about Kashmir?

Ans. He has said this many years back also and has gone back upon his words. What is the use of believing what he says today unless he proves to be consistent? That is our difficulty. He can retract himself or change or say whatever he likes, in one place one thing and in another place another thing. He has said we have to believe him, but he must be believable!