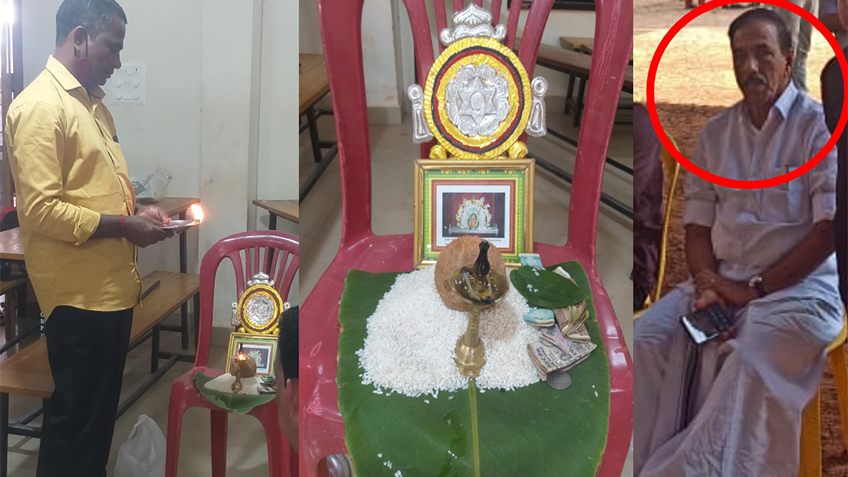 is going on in Kozhikode since the last three days. Except for some disputes regarding the judgements and consequent appeals, things have been peaceful since the very inception. Any untoward incident can kill the beauty, pageantry and elegance of Kerala School Youth Festival launched in 1957, few months after the state of Kerala was formed.

Consequently, tension mounted in the “Muppilisserry” Stage in the Achuthan Girls School on January 4, Wednesday. Choukki Pooja is a ritual to be performed before the artists wear the make-up and the necessary costumes. It is the concept of seeking Lord Vighneswara’s permission. It is part and parcel of Yakshaganam since the last several centuries. It is being followed in Youth Festival stages also. The authorities asked to stop the Pooja when the second batch geared up to stage the programme as a part of the competition. They forcefully put out the traditional lamp. Pooja was performed for the teams from Kozhikode, Wayanad, Kasaragod and Kannur districts. They alleged that musical instruments were used by the teams. But, at that time, there was no programme on the stage. It was the time of interval.

Yakshagana Guru Madhavan Netanika said, it was the first ever incident in his 22year old artistic life. The artists protested and declared that they would not participate in the contest until the authorities apologise to them. Guru said – “We forgave them, but God would not.”

Police came when Yakshagana artists lodged their complaint. Media men got wind of the issue and they came to the spot. The organisers and police prevented them. And, two policemen remained there as sentries. The police pacified the artists; then the contestants agreed to participate in the programme. But police did not take any action against the organisers who unleashed atrocities against the contestants.