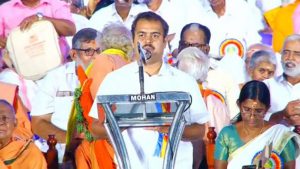 Bharat Bhushan, the brother of Kanaka Durga, an ultra-Left activist who visited Sabarimala violating traditions and hurting sentiments of crores of devotees of Lord Ayyappa, tendered a public apology at Ayyappa Bhakta Sangamam, organised by Sabarimala Karma Samiti in Thiruvananthapuram on January 20 (Sunday).

An emotional Bhushan, with folded hands, addressed the mammoth gathering of people and tendered an apology. “You all know about the drama she and her accomplices committed the other day. She pushed down her mother-in-law and created a scene. I sincerely seek forgiveness from the saints and devotees for my sister’s action. We won’t allow her to enter our house unless she seeks an unconditional apology from Hindu society,” said Bhushan. 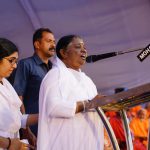