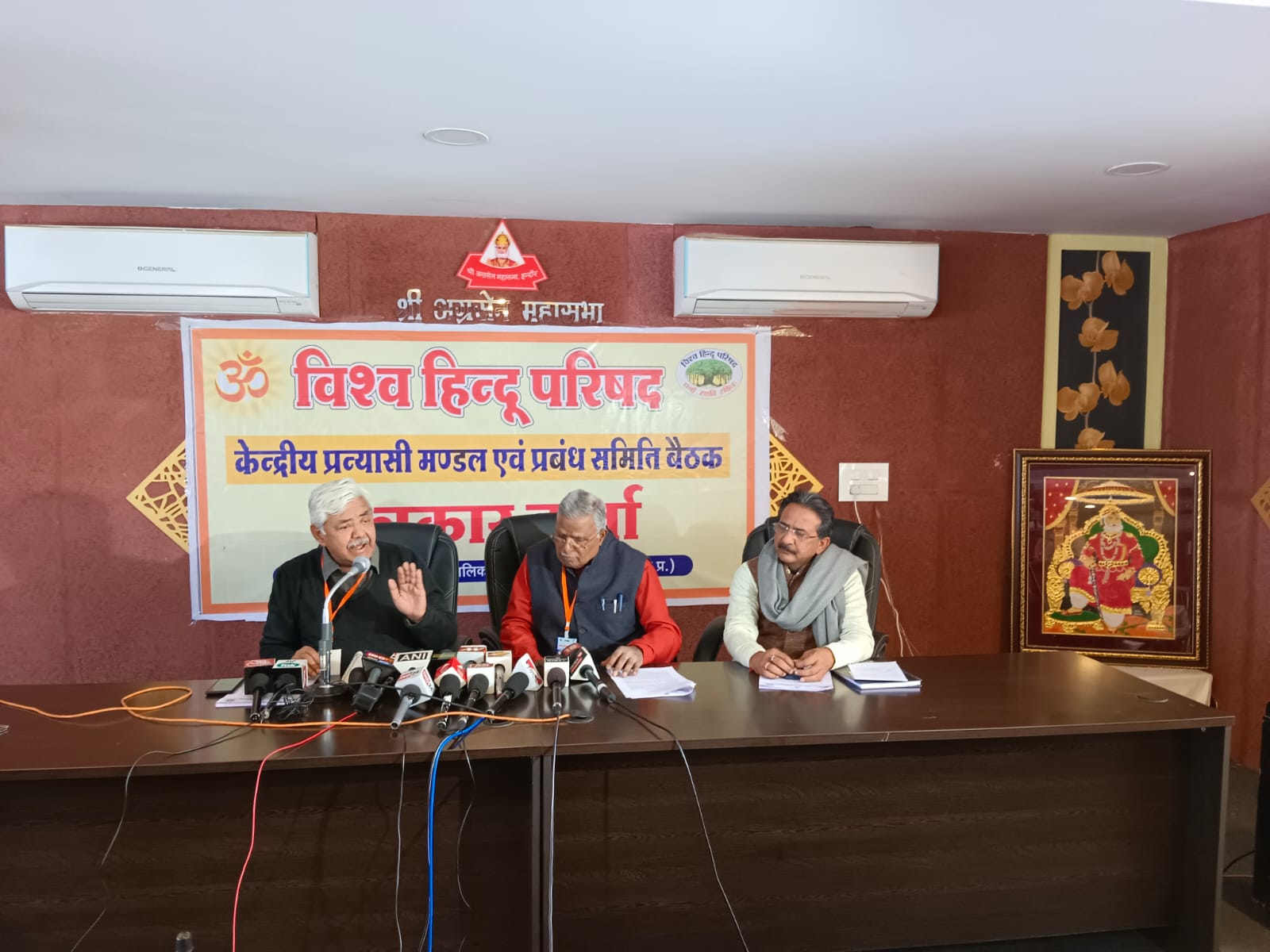 Indore. The 3-day meeting of the Central Board of Trustees and the Governing Council of VHP concluded today with a resolution to defeat religious dogmatism. Addressing a press conference, the Central Working President of Vishva Hindu Parishad, Advocate Alok Kumar said that a comprehensive policy has to be made at the global level to deal with the toxic effects of religious dogmatism. This narrow-mindedness and exclusivism has to be neutralised at the intellectual, social and political levels. Violence, looting, rape and murders are used as weapons by a large section of Islam in the name of Jihad. Now this will not work. We will not allow any part of Bharat to become Dar-ul-Islam. VHP, Bajrang Dal, Durga Vahini along with revered saints and thinkers of the society have been fighting it steadfastly. We will speed up this work.

He said that at present we have direct work in 30 countries of the world, out of which representative Karyakartas from 24 countries had come for the International Coordination Meeting in Mumbai for 3 days at the end of December-2022. Respect for Hindu Dharma by virtue of its respect for Mother Nature and Life is increasing all over the world; now we will promote this positive development and connect people with Hindu values of integral humanism. Vishva Hindu Parishad will work with this goal to solve the problems of Hindus wherever they are and for the cause of a united, organized, well-refined, graceful and dignified Hindu society.

In the year 2024, the VHP organization is completing 60 years of its life and work. In the meeting, as a resolution, an action plan has been made to make students Sanskaarvaan (well-cultivated/refined) and Shraddhaavaan (reverent) all over the world through Bal Sanskar Shalas, competitions of Dharmic education, spreading of holistic, altruistic and syncretic Hindu values.

An important resolution passed in the meeting on “Religious Dogmatism – Its Ill-Effects and Solution”, made it clear that the declarations by some traditions that “Only my religion is right, others have to accept and live it and if they do not accept it, then I have the divine command to eliminate them!” are unacceptable to humanity as those who insist on this “heavenly command” to destroy have actually destroyed many ancient civilizations of the world! The resolution reads – “Unfortunately, despite the toxic experiences of many centuries, religious radicalism and dogmatism of the desert traditions remains a challenge for the whole world even today. These radicals are also responsible for the terrorist attacks happening here and there in the world every day…” “…The series of inhuman atrocities on non-Muslim women through ‘Love Jihad’ and also the Jihadi activism of the “Sar Tann Se Judaa Gang” (beheading gang) are the ghastly faces of this religious radicalism….”

A large section of Christian missionaries is engaged in the agenda of engineering social enmity, fostering terror, and converting people through the tactics of force, fraud and allurement. It was also urged in the resolution that Religious radicalism would prove to be a suicidal path for the Christian and the Muslim communities instead of their development. They should replace their “radical leadership” by sensible and rational leadership who stand for development and harmonious co-existence.”

VHP’s Trust Board appealed to all sections of the society not to patronise such anti-national tendencies, not to destroy the future for the sake of immediate gains. It asked people to play their role in dispiriting religious dogmatist and separatist leadership and cheering open-minded leadership that takes the society towards harmony and development.

The Board of Trustees also appealed to the Central and the State Governments to control the madrassas and missionary schools that teach exclusivism, extremism and separatism and make arrangements for development and harmony-oriented education.

The central government should enact stringent laws to prevent illegal conversions and religious dogmatism. Along with this, a demand was also made to pass and implement the Uniform Civil Code (UCC) in the entire country.

Hindu society has long been a victim of religious dogmatism of the desert traditions, but it has proved formidable to those challenges. “VHP will organize a mass awareness campaign in this regard to create eternal vigilance and expose the conspiracies of the dogmatic leadership”.