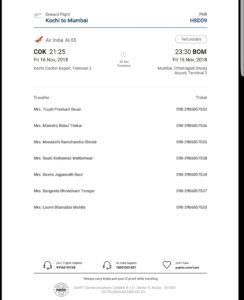 The HC’s intervention was in response to a petition filed by GK Suresh Babu, the chief editor of Janam TV. The petition pointed out that Janam TV men was forcefully ousted from Sabarimala during the midnight of November 14.

The government informed the court that Sabarimala is a highly protected area. It also said, the restrictions on media persons happen sometimes for the safety of them. Then the court asked the government: Can’t 15,000-strong police give proper protection to the media?

Then HC asked the state government to submit an affidavit stating that media will not be stopped at Sabarimala.

Trupti Desai has decided to return, but has promised to come back

The decision comes after protesters at the Cochin International Airport refused to budge even after 14 hours.