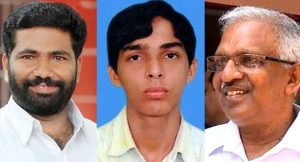 CPM Kannur district supremo P Jayarajan and his blue eyed boy T.V. Rajesh MLA are charge-sheeted by CBI in connection with the murder of Ariyil Shukoor who left CPM and joined Indian Union Muslim League (IUML). Shukoor was killed on February 20, 2012. The crime was in connection with an alleged IUML attack on the car Jayarajan and Rajesh were travelling in. It is alleged, later on Shukkor was caught by the CPM workers in a nearby place and held in a house. It is again alleged that they took his picture with a mobile camera and sent to Jayarajan and Rajesh and they identified him as one among the people who attacked their vehicle. The allegation continues that then Shukkoor was tied to a tree in a paddy field and was interrogated for nearly two and half hours at the end of which the mob killed him mercilessly by beating with iron rods and stabbing with daggers. While Shukkoor was in the custody of the CPM goons before he was lynched, his brother had reportedly approached several CPM leaders and pleaded to save the life of his brother, but in vain.

CBI charged Section 302 and 120B against the alleged and submitted the charge sheet before the Sessions Court, Talasserry. CBI has taken statements from media persons and others for collecting evidence.

Earlier Kerala Police had charged Section 118 against Jayarajan and Rajesh for concealing the design to commit the offence, because, they were aware that Shukkoor was in the custody of their comrades.

As the Kerala Police’s enquiry did not turn fruitful, the mother of the killed approached Kerala High Court praying for the CBI inquiry into the murder of her son. Her petition went before Justice Kamal Pasha. Hearing the prayer, Justice. Pasha said, it was most surprising that police were not able to include the names of the two CPM leaders in the conspiracy aspect of the case. He had added that the court could not be a mute spectator to that grave injustice.

RSS and inspired organisations have been pointing out since long that Jayarajan has been the major conspirator behind several murders during the last more than two decades. There were allegations that he was the master brain behind the murders of several RSS/BJP leaders and of the rebel CPM leader T.P.

Now if the legal procedures move in the right direction it will give a fillip to the endeavours to put an end to the murder politics in Kerala in general and Kannur district in particular. Because, until now no senior CPM leader has been punished; junior, local leaders are charged and punished. Since the senior leaders are spared, the murder continued without break. Now, all the right-thinking people in the state believe that things will change with this new development.