Indore. Shashikant Phadke, a Rashtriya Swayamsewak Sangh (RSS) functionary associated with Gram Bharti-Vidya Bharti has alleged that the syllabus designed by Central Board of Secondary Education (CBSE) is “anti-national”, which needs to be made nationalistic.

Shri Phadke, who is the convenor of Gram Bharti (rural education wing of the RSS), told reporters in Neemuch on June 12 that CBSE syllabus was confusing the minds of India’s generation next. He said that Gram Bharti identified 135 flaws in CBSE syllabus and even moved to court for their deletion.

“Sustained efforts by Gram Bharti-Vidya Bharti have resulted in deletion of 80 of the 135 flawed parts in the CBSE syllabus,” he said. Phadke was in Neemuch to take stock of Gram Bharti activities in the region of the state. 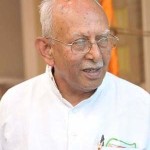