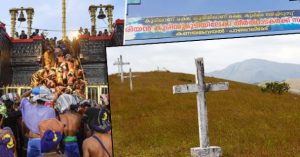 The church with the alleged connivance of the state government is encroaching the ‘sacred forests’ associated with the Sabarimala temple, known as ‘Poonkavanam’ in Kerala. The Malayalam newspaper Janmabhumi reported that massive encroachment of forestland is taking place at Panchalimedu, a part of Sabarimala forests in Idukki district. The entire region has been designated as an ecologically fragile under the Environment (Protection) Act.

Panchalimedu, a sacred place for local Hindus named after Panchali/Draupadi, is believed to be a place inhabited by Pandavas during the 12 years of exile. An ancient Bhuvaneswari temple, under the Travancore Devaswom Board, is also situated nearby the encroached land. The church is just replicating their usual strategy to seize government and forestland that has been successfully implemented in the rest of the state.

The Church has already established boards and an arch, claiming that it is a Christian pilgrimage centre. The reports suggest that the move is aimed at the Sabarimala temple which has on the radar of the Conversion lobby for the past seventy years.

There are reports about similar Church-sponsored land encroachments in other south Indian states like Tamil Nadu and Andhra also.

Four decades ago, the church had made a similar attempt to grab the Sabarimala lands in Nilakkal, targeting the major Hindu pilgrim centre in South India. Despite strong protests from Hindus, the government has handed over the Catholic Church around 5 acres of land free of cost.

Despite media reports, the State Government has been maintaining a stony silence over the issue. The CPM government had let the land grabbers and ‘Cross Farmers’ go scotfree even in the past. In 2017, when similar encroachments were reported from Pappathichola in Munnar, the revenue officials had removed it. But the cross was later reinstalled after the Chief Minister Vijayan and other CPM leaders intervened. Blasting the officials who razed down the illegal cross, Chief Minister Vijayan had said in a speech, “What was wrong with the Cross, which is the symbol of the belief of a major section of the people? While acting against such a symbol, the officers should have consulted the government. I asked the District Collector, with whose permission you carried it all out. You should have known a government is here. Why did they take extraordinary preparations as if it were a ‘grave’ encroachment?” 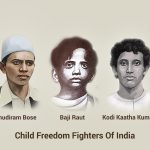