Aigarh. A church with a cross in it that belonged to the 7th Day Adventists overnight turned into a temple adorned with a portrait of Shiva after what some Hindu groups in Aligarh termed the “successful ghar wapasi” of 72 Valmikis who had become Christians in 1995.

There was an elaborate shuddhi karan (purification) ceremony on Tuesday, Aug.26 inside the church in Asroi, 30km from Aligarh. Children from the village soon took over the premises and were seen playing in it by afternoon on Wednesday. A cross was allegedly remove from the church and placed outside the gate and a portrait of Shiva installed.

Khem Chandra, Sangh pracharak and pramukh of Dharam Jagran Vivad in Aligarh, said, “This is called ghar wapasi, not conversion. They left by choice and today they have realized their mistake and want to come back. We welcome them. We can’t let our samaj scatter; we have to hold it tight. I have told them that honour comes from within the community and not from outside.” Chandra added that in the years that followed their adoption of Christianity, he met heads of the eight Valmiki families numerous times to convince them to reconsider their decision.

However, as news of the ‘reconversion’ spread, tension started building up, with sleuths of the Local Intelligence Unit (LIU) converging on the spot. Some villagers told on condition of anonymity, that the Shiva portrait had been removed and kept inside the house of a local resident. Anil Gaur, one of those who returned to the Hindu fold, said it was because they were unhappy with the caste system that they changed their religion. “But we found ourselves in no better position among Christians,” he said. “As Hindus we had no status and were restricted to doing menial jobs, but even after remaining a Christian for 19 years, we saw that no one came to us from their community. There was no celebration of Bada Din (Christmas). The missionaries just built a church for us in the vicinity where some of the villagers got married. That was all.”

Seventy-year-old Rajendra Singh said he, too, was happy to reconvert. “While sleeping outside the church one day I suffered a paralytic attack. I found myself unable to move. It happened last year and since then I have been thinking that it may have been Mata Devi’s punishment for abandoning my faith,” he claimed.

Osmond Charles, a lawyer and community leader in Aligarh, isn’t convinced though. “Ghar wapasi sounds like a conspiracy,” he said. “Sometimes we hear ‘love jihad’ and now we have ‘ghar wapasi’. Is this the sign of a Hindu Rashtra in the making?”

Father Jonanthan Lal, pastor at City Methodist Church, said, “The ‘purification’ pooja took place inside the church which belongs to 7th Day Adventists. Such an activity shouldn’t have taken place there. Faith is a personal matter but havan inside a church is not.”

Meanwhile, there is a sudden, eerie quiet in Asroi. Villagers hurry inside their houses if they are asked about the reconversion and most say they know nothing about it. The presence of cops has added to their anxiety. “Don’t ask anything. I don’t know what happened,” a young man said, turning away swiftly. 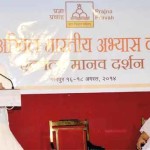