Conversion is a sinister game that causes an avalanche of demographic balance in the society. Let India emerge as a beautiful spiritual garden with a variety of flowers of faith and religion.

My mind goes back to the yester years, when the battles were fought on the grounds of expansion of region and extension of religion. But today a new kind of battle is taking place in this modern age of liberty, technology and free enterprise. And this is taking place silently at the back of the society with a view to increasing the numbers of a religious fold and thereby engineering to install an empire of a single religion in this planet.

These strategies, as they reveal today, are aimed at working out a magic in the demographic plane. There is a perceptible loss of people from the fold of a great religion of which Bharat is the homeland. If we look to the history, during the British raj the rate of conversion were very negligible. Why, today, it is advancing with the force of a raging fire?
Wherever you move, the north or the south, east or the west, one finds the march of a religion on the wings of conversion and another through the process of over population. The mushroom growth of their respective temples indicates not only the vindicating growth of their respective support but also conveys an authoritarian way of conversion that is wild and rabid. While one group that adopts the medieval ethics to overpopulate the planet, significantly this subcontinent, hinders the legislation of uniform civil law for this country.

The aggressive assault on the culture, nay, civilisation of the majority of the people of this country remains a question of national headache. Conversions are actively poised against the sociological existence and the identity of the following of a faith. The way it is being supported by the money bag, medicine bag and school bag is a questionable activity that needs rectifications. Taking the advantages of simplicity and ignorance of the poor people, conversion is moving like a bulldozer into the slums, the suburbs and significantly Vanvasi Samaj (tribal habitations) and thereby destroying the cultural moorings of the ancient country of spiritual liberalism and catholicity.

Never before nor today, the Bharatiya People as a collective has behaved to present a uniform pattern of living with uniform dress, diet and dialogue. In certain areas of their heart and understanding there flows a stream of consciousness to what we may call as finer cultural sensibility defining a way of life, significantly, charged with Vedic virtues, values and vigour.
If the master brain behind conversion, dream of religious monism, then it is a case of sad and mad story. Conversion is a sinister game that causes an avalanche of demographic balance in the society. Monism does not mean dissolution of religion to permit the existence of a single faith, a single monastery, a single book, a single path to a single God. The way the new vultures of culture, land at the time of displacement of destitute to offer service of food, clothing and medicine to the hungry and helpless and there by lure and lead them away to enter another new kingdom of faith, is a deplorable activity.

I wish no Talibanism in the name of resistance to such kind of mass conversion. Simply inviting the attention of the serious mind to watch how a hidden hand is playing in this process of destabilising of social peace, and reducing gradually the plebiscitary strength of the majority Hindus in this ancient country of Vedic civilisation. Bharat never favoured the promotion, propagation and protection of Hinduism beyond the borders of the motherland. It always opposed colonialism, be it ideological, cultural, religious or economic. The nation believe in non interference in the socio, cultural living of the people in a particular region.
Bharat also believes in the dictum of Gita ‘Swadharme nidhanam shreyah paradharmo bhayaavahah’. One should learn and relearn to respect the mother religion, mother dress, mother diet, mother dialogue (tongue) and above all the motherland. This helps to promote nationalism, spiritualism, patriotism and the sacred aspect of the culture. Everyone is busy in prophesying his/her plan of liberation. Nothing should be advocated to the extent of the cause of neglecting culture and civilisation of the ancient countries. Let Bharat emerge as a beautiful spiritual garden with a variety of flowers of faith and religion.
(The writer Swami Samarpanananda Giri  is the Vice President of Prajnana Mission-India) 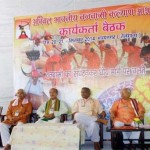