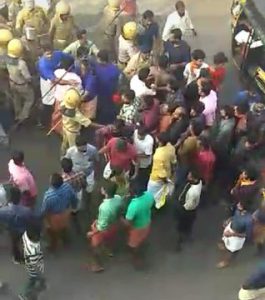 CPI(M) goons attacked a RSS path sanchalan at Neeleshwaram in Kasargod district. The path sanchalan (route march) was organized as part of the prathmik shiksha varg (21st to 29th Dec) organized at Rajas High School. Around 15 Swayamsevaks were injured in the attack.

The police fired tear gases to get the situation under control. The injured Swayamsevaks are admitted to hospital.

The RSS organized the camp  after getting the requisite permission from the authorities. From the biggning of the camp CPM Criminals make atrocities against the camp even the time of Food. But the camp Leaders maintain the Peace. Today they attacked the path sanchalan.

The communist party has been on a rampage against RSS and BJP. Two days ago they blocked and attacked the convoy of Karnataka Chief Minister, B. S. Yedurappa, which he was visiting a temple at Kannur in Kerala. 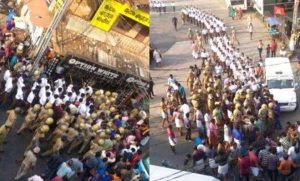