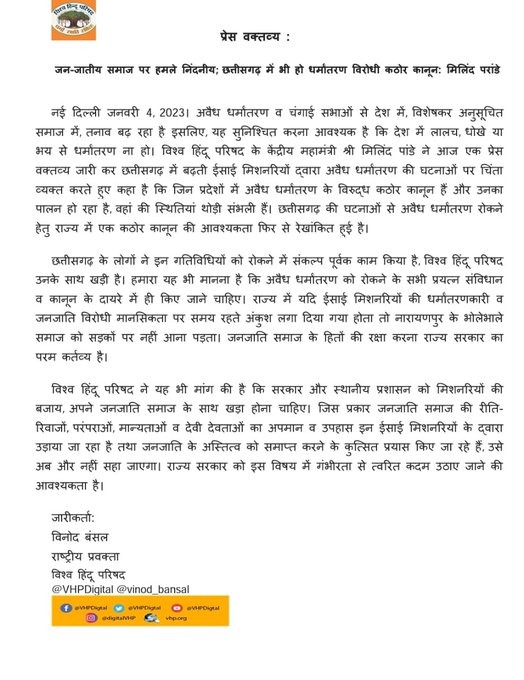 New Delhi. Due to illegal religious conversions and fraud ‘Changai’ (‘healing’) meetings, tension is increasing in the country, especially in the scheduled communities! It is, therefore, indispensable to ensure that there is no use of force, fraud and allurement to convert people. The Secretary General of Vishva Hindu Parishad Milind Pande, through a press statement, expressed serious concern over the incidents of illegal conversions by Christian missionaries in Chhattisgarh, and said that the states having stringent laws against illegal conversions and the same is being followed, the conditions there are a bit stable. The incidents in Chhattisgarh have again underlined the need for a stringent law in the state to stop illegal conversions.

The people of Chhattisgarh have worked determinedly in stopping these wicked activities and Vishva Hindu Parishad stands with them. We also believe that all efforts to stop illegal conversions should be made within the ambit of the constitution and law. If the converting and anti-tribal mindset of the Christian missionaries in the state had been curbed in time, the innocent tribal society of Narayanpur would not have had to come on the streets. It is the supreme duty of the state government to protect the interests of the tribal society.

VHP has also demanded that the government and local administration, instead of being seen on the same page with the proselytising missionaries, should stand firmly with the state’s tribal society. The way the customs, traditions, beliefs and deities of the tribal society are being insulted and ridiculed by these Christian missionaries and nefarious efforts are being made to end the existence of the tribes, it will not be tolerated anymore. The state government needs to take serious and quick steps in this matter. 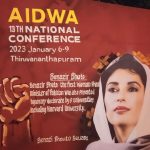