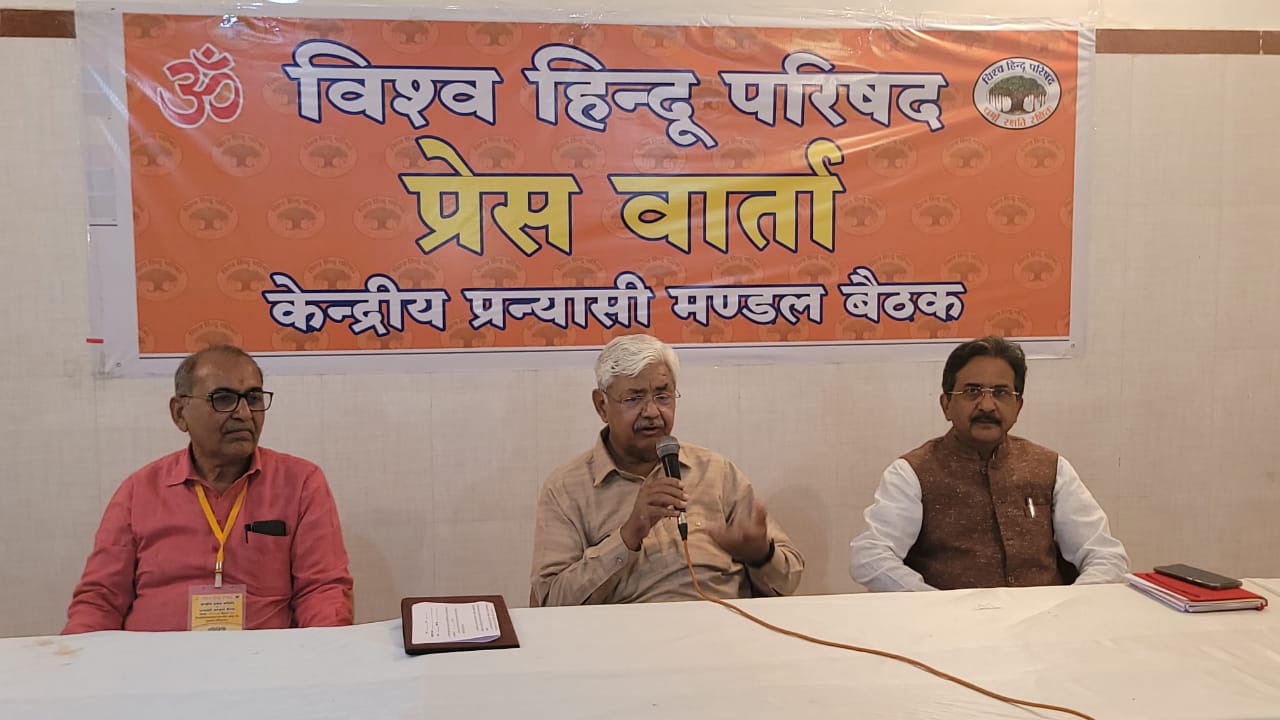 Junagadh (Gujarat). VHP has demanded that converted Christians and Muslims should be excluded from the list of tribes. The Central Board of Trustees through a unanimous resolution passed today, has demanded from the Central Government to make necessary amendments in the Constitution to exclude converted tribal people from the list of tribes, so that genuine tribes can get their due reservation rights. Many Courts in the country including the Honourable Supreme Court has on many occasions given rulings in this regard.

How long will the tribal brothers and sisters be kept deprived of their constitutional rights? VHP Working President Alok Kumar Ji said that Hindu society in Bharat has since ages lived in towns, villages and forests. Though there has been diversity in mode of worship according to their spiritual tradition, their inner being has always been one. It is said that conversion of individual is conversion of nationality. Efforts are being made to weaken India through the efforts to convert poor Scheduled Castes and Scheduled Tribes people through coercion and allurements. Now, when the converts have understood the temptation and pressure of the Christian missionaries, this conspiracy is taking place through deceitful means. The Christian missionaries do not hesitate to go to any extremes for conversion work. It is no more a hidden fact that crimes like the gruesome killings of revered saints like Swami Lakshmanananda Ji in Orissa and Swami Shanti Kali ji in Tripura happened with the supportive environment created by the church. Yet, the nefarious conversions are being pursued with greater intensity, even though the names of the converted Scheduled Castes people are not changed.

With regard to the Scheduled Tribes, Alok Kumar said that, according to the Constitution of India, people who convert to Christianity and Islam should not be eligible to get the reservation and other benefits given to the Scheduled Tribes. But, even after getting converted, they are availing both types of benefits. In the case of Kerala vs. Mohan, the Supreme Court had made it clear that if a person of a tribe renounces his original religion and adopts another religion and leaves his traditions, customs, rituals and rites, then he will not be considered a tribe. Surveys point out that converted tribals form only 18% of tribal population but usurp more than 80% of the reserved seats.

In view of the increasing conspiracy of Christians and their prevalence, VHP demands from the central government that necessary amendments be made in the Constitution, to exclude converted tribal people from the list of tribes, so that the genuine tribals can get their due rights.

VHP working president also said that the current year is the 400th ‘Prakash Parv’ of Shri Guru Tegh Bahadur ji. Shri Guru Tegh Bahadur ji was born on 1st April 1621 to Mata Nanaki ji at Shri Guru Hargobindji’s house in Shri Amritsar Sahib. It was a time when Aurangazeb’s tyranny was at its height. He was forcibly converting people in immoral ways. He was so cruel that rivers of blood were flowing due to his merciless zeal to promote Islam. At such a time, Guru Tegh Bahadur ji protected the religion with his supreme sacrifice. He did not convert to Islam despite the cruel efforts of the Mughal ruler Aurangzeb. That is why, he is called ‘Hind Ki Chadar – Guru Tegh Bahadur’ and is also called ‘Tilak Janju ke Raakha’.

VHP calls upon its samities and workers across the country to organize programs at all places in the memory of Shri Guru Tegh Bahadur ji in this ‘Prakash Varsh’, so that the whole country follows on the right path shown by Shri Guru Maharaj, and is always ready to protect Dharma.