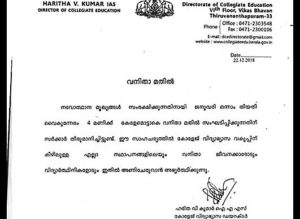 CPM-led Pinarayi govt. runs from pillar to post for ‘catching’ the women and children for the Women Wall they organise on January 01, 2019.

Since CPM and LDF have been flaunting various sorts of themes and concepts, at different stages, for the Wall, the people of Kerala sill do not know what the organisers mean. Whatever they say, no doubt, it is for the promotion of the pet theme of CPM and LDF leaders, that is, “young women’s entry to Shabarimala temple.” Because they have been trying to implement it since the very beginning of the Sabarimala season after the historic Supreme court verdict of August 28, 2018.

At the very beginning, CM convened a meeting of various Hindu caste organisations and the idea floated was “Renaissance.” Obviously, he was referring to the Renaissance, read, young women’s entry to Sabarimala temple. CM, his govt. and his police have made several ridiculous attempts to implement it, but all turned futile, thanks to the stiff opposition from the devotees. After the first round of meeting, CPM could feel that Hindu society did not welcome the idea well.

Significantly, most of the Hindu organisations who participated in the first round of meeting withdrew from the Wall project when they realised that the idea was ‘temple entry.’ A real dilemma for CPM and LDF. The grand mega success of Ayyappa Jyothi organised by Hindu organisations on December 26 was a rude shock to the Wall supporters. That the Ayyappa Jyothi, organised under the auspices of Shabarimala Karma Samiti, came out with flying colours with incredible success even sans any sort of publicity like posters, writing bills on the walls, fundraising, hoarding or anything of that sort, have shaken the CM and the entire machinery of his CPM.

Now, the success of the Wall is a prestigious issue for all of them. The next step is to make it a success, literally, by hook or crook. The easiest option for them is to misuse the govt. machinery. They have been doing it in the worst possible manner. They do it precisely what their comrades have been doing in the communist-ruled countries. That means, merging of party apparatus and govt. apparatus into a single system where party secretary is the de facto ruler. (Here CM controls the party apparatus too).

In this regard, heads of different departments of GOK keep on issuing orders and circulars instructing the ‘subjects’ in the respective departments to participate in the Wall. Engineering examinations University for Science and Technology had scheduled to conduct on January 01 have been postponed. Even IT firms, which are in the private sector, have been instructed to direct their employees to participate in the Wall. The CEO of Techno Park in Thiruvananthapuram has received district collector’s instruction to facilitate the women’s participation in the Wall. Circular asks the CEO to arrange transport for the participants. Since a lot of firms are foreign ones, CEO is now in a dilemma. He does not know how to convince their bosses. PSUs are already instructed.

All govt. departments have been instructed to ensure the participation of the women staff. Heads of the departments are getting repeated instructions. The actual number of women employees should be given to the respective collectorates immediately. Co-operative societies are instructed to donate either as money or as printed posters. Private bus owners and ambulance operators are under heavy pressure to provide their fleets.

Women working under the Rural Employment Guarantee Scheme are instructed to join the wall and get the wages; if they say no, they will lose the wages.

Despite the High Court order not to deploy the girls below 18 in the Wall, CPM-controlled Bala Sangham declared that one lakh girls would be deployed. Sangham resolution says, it would not permit anyone to deny the children their “rights”.

In some departments, employees are instructed to give the selfie pictures to their union leaders as proof of their participation.

Even private un-aided schools are instructed to provide their vehicles. It is oral instruction with a veiled threat that they will be in trouble when they need ‘fitness certificate’ for their vehicles.

College Education Director has sent an instruction to the colleges to send their women employees and girl students to join the Wall. Reports from Alappuzha says, Deputy Director of Education has asked the schools in the zone to ensure the participation of the girl students.

BJP president Adv. P.S. Sreedharan Pillai asked the CPM to put an end to the misuse of power for the Wall. He asked CM if he lacks confidence in organising people hence misusing govt. machinery. He reminded that the same Pinarayi had banned “Onappookkalam” (floral designs on the floor, part parcel of Onam celebrations) stating that it would steal the precious working hours. The same CM now asks the govt. employees to participate in the Wall. Govt. employees are going out to paste the posters, to distribute the pamphlets and to run the pilot rallies during office hours.

Now, Kerala witnesses the worst sort of blatant misuse of power for a party programme of CPM. CM and his party believe that the pet name ”Wall of Renaissance” will purify them.