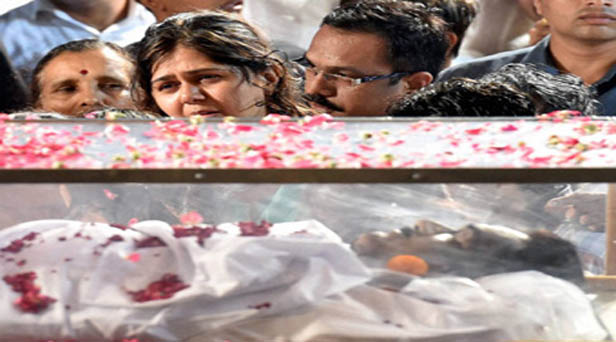 The Union minister Gopinath Munde was cremated with full state honours in Parli and huge crowd of villagers and political leaders were present to pay their last respect to the departed leader.

Munde’s daughter Pankaja lit the funeral pyre amid chant of hymns .
Leaders appealed for calm as Union Minister Gopinath Munde’s mortal remains reached his native village Parli for last rites. His eldest daughter Pankaja will lit the funeral pyre . One lakh supporters gathered at grounds of the Vaijnath Sugar Factory at Pangri village to pay their last respects to the leader Gopinath Munde .
The village of Parali in Maharashtra’s Beed district was transformed into a sea of grieving humanity as union minister Gopinath Munde’s body reached here by a helicopter from Latur Wednesday morning.
Hundreds of youth and party workers ran towards the chopper to catch a glimpse of their beloved leader who was born in a small hamlet here, grew and carved a niche for himself in national politics.
There was chaos at cremation venue and Munde’s daughter appealed to supporters to stay calm.
The last rites of Union Rural Development Minister Gopinath Munde, who died in a road accident in New Delhi on Tuesday, will be performed on Wednesday with full state honours at his native Parli village in Maharashtra’s Beed district.
The body of senior BJP leader and Union minister Gopinath Munde, who was killed in a road accident in New Delhi early Tuesday, was flown in to Latur from Mumbai on Wednesday morning.
Munde’s eldest daughter and Parali legislator Pankaja Munde-Palve will perform the last rites at the state funeral being accorded to Munde. Munde’s wife is Pramod Mahajan’s sister and they have three daughters.

Thousands of mourners, including senior party leaders, activists and commoners received the coffin at Latur airport.

Earlier, the body was taken from the Mumbai residence of the Munde family, where security forces accorded a guard of honour, for the flight to Latur.

From Latur, it was taken by a special helicopter to Beed, which is around 65km away, for the last rites.
BJP veteran leader LK Advani, Home Minister Rajnath Singh, Urban Development Minister Venkaiah Naidu and Health Minister Dr Harsh Vardhan will attend Gopinath Munde’s funeral.
The funeral will take place in the grounds of the Vaijnath Sugar Factory at Pangri village which Munde owned.
Munde’s body will be kept for “antim darshan” at Parli from 9 am onwards and the funeral will take place after 2 pm. His daughter Pankaja, a BJP MLA, is expected to perform the last rites.
“Government has decided that state funeral would be accorded to late Gopinath Munde. Funeral will take place at his home town in Beed district tomorrow,” said a home ministry spokesperson.
As a mark of respect to the departed leader,the national flag will be flown at half mast on Wednesday as well, the day of the funeral, at the place where the funeral will take place. National flag was be flown at half mast in Delhi, state capitals and Union Territories on Tuesday

Gopinath Munde’s body is being flown to his native place in Beed district of Marathwada for cremation later today after being kept at the BJP office here overnight.
Munde’s body which was flown from Delhi last evening and was kept outside the state BJP office overnight, before a brief halt at his Worli residence, was put in an ambulance which drove to the airport.
From Mumbai airport the body is being flown to Latur airstrip and from there it will be taken to Munde’s native
place Parli, 70 km from Latur.
His body will be kept for “antim darshan” at Parli from 9 am onwards and the funeral will take place after two pm. His daughter Pankaja, a BJP MLA, is expected to perform the last rites.
Munde leaves behind wife and three daughters. The funeral will take place in the grounds of the Vaijnath Sugar Factory at Pangri village which Munde owned. The 64 year old BJP veteran died after a road accident in Delhi yesterday, a week after taking over as Union rural development minister in the Narendra Modi cabinet. 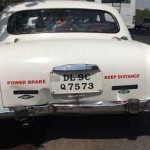