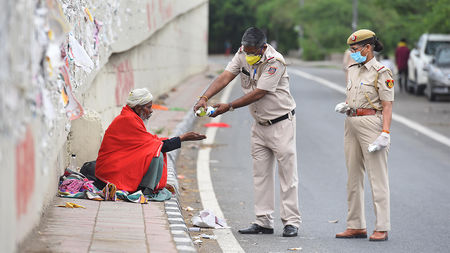 New Delhi. As India continues to fight the onslaught of chinesevirus, a ‘deliberate disinformation campaign’ is being run by Pakistan to ‘instigate’ Indian Muslims to violate the nationwide lockdown announced by the government, a Delhi Police report claims.

Earlier, Indian police officials had found that Pakistani social media handles had spread fake news among Muslims in India during the riots in northeast Delhi in February end. According to Delhi Police sources, a similar campaign is now being carried out to disrupt the 21-day lockdown.

A report, titled ‘Project Digital Vaccine: Weaponising Disinformation to Destroy COVID19 Lockdowns’, prepared by cyber experts of Delhi Police’s Special Branch, stated – “Several of the videos (circulated on social media in the last one week) appear to be shot in Pakistan and Middle East but audio in Hindi has been superimposed to create a Hindi video.”

“Videos of Muslims refusing to get themselves tested and beating medical personnel are also being spread with request to do the same and inspire other Muslim brothers. These disinformation/fake news videos watched by millions of users may end up influencing the thoughts of a large section of people in the targeted religion,” the report stated.

“Timely removal and quick rebuttal of such deliberate disinformation campaigns/fake news is required to ensure Indian citizens from all religions strictly follow the national mission of social distancing and adhere to the lockdown guidelines to avoid large gatherings,” according to the report, which has been accessed by this writer.

The report also claimed that popular Chinese video-making app TikTok is being used to spread fake information regarding Covid-19.

“TikTok, a chinese-origin video-sharing app, is being used as a primary medium to create and spread videos with religious instigation against health advisories and fake information regarding coronavirus. These videos are further shared on other platforms like WhatsApp, Twitter and Facebook.”

“Initial investigation reveals hundreds of high impact professional videos with disinformation/fake news are being spread to stoke religious emotions in Muslim community against social distancing and lockdown guidelines,” according to the report.

“Thousands of users have shared or viewed these videos on Twitter and TikTok alone and they have spread (those videos) widely through platforms like WhatsApp. Initial analysis of these viral videos reveal more than 10 million users have already watched them, suggesting a high degree of impact in society.”

The videos are shot in either Hindu or Urdu, indicating “specific targeting of audience” in India, added the official.

“Several of the original uploaders are deleting their accounts after the videos, which they have made, go viral suggesting deliberate disinformation and propaganda campaigns,” the police official, who did not wish to be identified, said.

“YouTube channels with lakhs of subscribers have uploaded videos and audio of sermons of Maulana (Muhammad) Saad, asking Muslims to make fun of social distancing and to ignore government directions,” according to the report.

Delhi Police has registered an FIR against Saad and others members of the Tablighi Jamaat under the Epidemic Disease Act, 1897, and relevant sections of the Indian Penal Code (IPC) for allegedly violating government orders with regard to holding religious gatherings and maintaining social distance.

The Tablighi Jamaat’s headquarters, which operates from the Nizamuddin mosque, has become one of the major coronavirus hotspots in the country.

More than 2,000 people, including foreigners and Indians from across the country, had participated in the Tablighi Jamaat gathering in Nizamuddin in mid-March.

Tablighi Jamat was set up in 1920s in India and its international headquarters, or markaz, has been in Nizamuddin ever since.

The Delhi Police report stated that videos of Maulana Saad have been uploaded mainly on two YouTube channels – ‘The Message of Islam’ and ‘Delhi Markaz’.

It further said that ‘The Message of Islam’ channel has posted a new video, claiming there was not a single positive Covid-19 case in the Markaz.

“The channels also host a separate playlist of preaching of Pakistani religious preacher Maulana Tareeq Jameel, who is a Tablighi leader in Pakistan. He has historic association with terror elements such as Masood Azhar,” the report added.