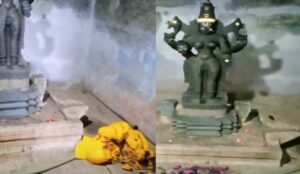 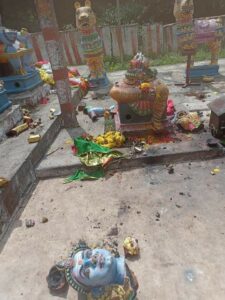 On October 6th, a group of devotees who climbed atop the hill to offer their prayers on Mahalaya Amavasya day in memory of their ancestors were shocked and saddened when they found the idols of the deities had been vandalized- beheaded and the premises ransacked. The temple houses, the murtis of Chelliamman, Periyaswamy Aiyanarappan, Sapta Kannigas, a large size horse statue etc. The hill temple is kept open only on Mondays, Fridays, Amavasya and Purnima days. This hill is five kilo metres away from the highly regarded pilgrimage town Siruvachur in Perambalur district of Tamil Nadu.

Was it the first time the Hindus had to undergo shock and feel hurt and humiliated? Though, this has been a recurring phenomenon in Tamil Nadu, irrespective of who is in power, in the last 4 months we find a huge spike in such instances of vandalism and sacrileges. Look at the following short list of reported instances —

Few days ago, the murtis of a Chola era temple in Pudukkottai district were found in a beheaded state. In a similar incident the presiding deity of another Amman temple in Tirunelveli was found broken on June 11.

We are not here to say that everything was hunky dory in Tamil Nadu prior to DMK returning to power this May after a gap of 10 years. In this respect, there is no difference between DMK and AIADMK as both of them are offshoots of the DK founded by EV Ramaswamy, the Hindu Basher.

Of the two, DMK’s motives, omissions and commissions are questioned more by the Hindus because of their ‘glorious ‘past. Their leaders are known to have utilized the platforms of Christian and Muslim organizations in ridiculing and condemning Hindu customs and practices such as observing Sashti/Ekadasi Vratam, or marriage related practices, Fire walking or even simple sporting vibhuti or kunkum on the forehead.

In addition, their alliance partners and co-travellers openly spit fire and venom on the Hindus by making inflammatory speeches. Just two examples….. Thirumavalavan, MP and the founder of the Viduthal Chirutaikal Katchi claims that even the prominent temples such as Srirangam and Chidambaram were originally Budha Viharas and they were forcibly captured and converted by invading Aryans. Similarly, the Christian priests like Esra Sargunam (in an open meeting told the audience, ‘to punch on the nose of any person who claims to be Hindu) and Mohan C Lazarus who apologized in the court for calling all the Hindu temples as houses of Satan. Now, after some months, last week he said in a video that our country is suffering of poverty and prostitution because of Vigraha Aradana.

What an unscientific or historically false argument! Because of such leaders, their followers get further emboldened to carry out any heinous act. Their audacity gets further encouraged by their belief that the current state government got elected predominantly of their mass voting in favour of DMK and its alliance.

In such a gloomy atmosphere, a pious Hindu recalls the horrific days of marauder Malik Kafur who was leading his army in the south when famous temples like Kapaleeswara of Mylapore (now part of Chennai), Srirangam, (no.1 temple for the followers of Vaishnavism) and Meenakshi of Madurai had to be kept closed without any prayers for more than a decade. People need not go far back into the history. We are all witnessing what sorts of desecration of temples taking place in Afganistan and Pakistan.