While delivering the speech, Suresh Soni said that for the children, the first school is the home and the mother is the first teacher. He added that the main objective of the National Education Policy is to empower children. Considering the totality of education, he said one should think on the basis of Indian knowledge tradition. He opined that the spirit of sanskar should come into educational institutions. 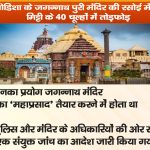