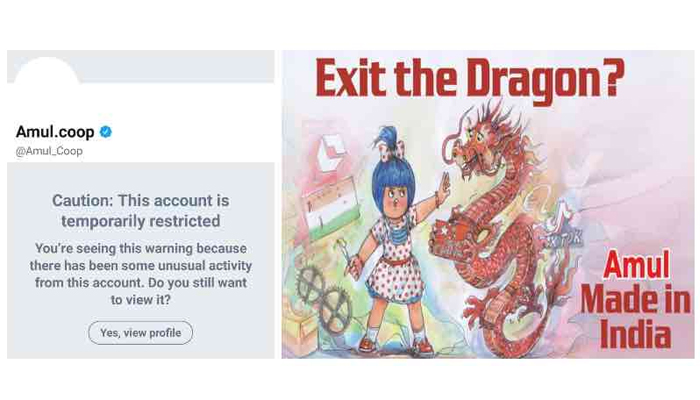 Vadodra. In a development that took many by surprise, microblogging site Twitter restricted the official account of dairy giant Amul early on Friday morning.
The top brass of the Gujarat Co-operative Milk Marketing Federation (GCMMF) that markets India’s largest food brand Amul, too was surprised by the caution alert that was momentarily displayed on its official twitter handle without any intimation to it.

Twitter got abuzz with the move as twitteratis linked it with Amul’s latest creative take ‘Exit the Dragon?’ that supports boycotting Chinese products.
In the latest topical, the iconic witty Amul girl wearing a red and white polka-dotted dress can be seen saving her country by fighting a dragon, behind which a logo of the Chinese video-sharing mobile application TikTok can also be seen. The creative also reiterates in bold letters that Amul is “Made In India” focusing on Prime Minister Narendra Modi’s call for ‘Aatmanirbharta’ (self-reliance).

“Caution – This account is temporarily restricted. You’re seeing this warning because there has been some unusual activity from this account. Do you still want to view it?” a post placed by Twitter on Amul’s official handle read.

Later, however, Amul could operate its account without any restrictions. “We have asked Twitter why we were not taken into confidence before putting such restriction. They should have intimated us,” said RS Sodhi, managing director of GCMMF, a $5.1 billion co-operative. Twitter is yet to respond to Amul.