New Delhi. The much-awaited science documentary in the classical language, revolving around the success story of India’s historic ‘Mars Orbiter Mission (MOM) alias ‘Mangalyaan’, would be premiered before a selected audience on August 21 in Chennai.

The first science-Sanskrit film in the history of world cinema, ‘Yaanam’ which revolves around India’s successful Mangalyaan mission, is all set to reach audiences this month.

MOM was successfully launched in 2013 by the Indian Space Research Organisation (ISRO).

ISRO Chairman S Somanath would launch the premier at Chennai in a function, which would also be attended by former chairman of the space agency K Radhakrishnan and the present VSSC Director S Unnikrishnan Nair.

He said ‘Yaanam’ is based on Radhakrishnan’s book “My Odyssey: Memoirs of the Man Behind the Mangalyaan Mission”. 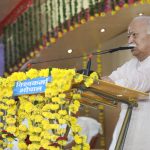