Kanoongo had arrived in MP’s Damoh for a surprise inspection of orphanages and children’s homes being run by Christian Missionaries in the district. He had only informed district officials about his arrival. According to the details in the FIR, Kanoongo along with Madhya Pradesh State Child Rights Protection Commission member Omkar Singh Markam reached a children’s hostel run by Christian missionaries located at Katni Bypass. The FIR mentions that he had to wait for a long time at the main gate. Top officials were along with him but still, the main gate did not open.

Kanoongo claimed that the conversion of children was going on in the Christian missionary institutions. He said that a child from the Dindori district of the state was brought here, who was being trained to become a priest. Following this, Kanoongo reached the Dehat police station to lodge a complaint. Kanoongo claimed that after a long wait, the FIR was registered against the operators of the Christian missionary. He also claimed that before the surprise inspection, there was no one else but the department’s people to inform the concerned institutions, adding that he himself had caught the mobile phone of an officer.

“This is a violation of the religious freedom of children. We have lodged an FIR and told the Police to investigate this. The Department of Women and Child Development here is negligent and it seems that the local officials are complicit,” said, NCPCR chairman Priyank Kanoongo. With the case being surfaced, the website of ‘Mid India Christian Mission’ has apparently undergone maintenance and is inaccessible.

Additional Superintendent of Police Shiv Kumar Singh said that the chairman of the commission had made allegations of conversion and lodged an FIR. A case was registered against ten persons of the Christian missionary under section 370 of the IPC, sections 42 and 75 of the Juvenile Justice Act 2015 and sections 3 and 5 of the Madhya Pradesh Religious Freedom Ordinance 2020. The matter was being investigated, he added.

On the other hand, the principal of the hostel, Treeza Miss said, “The allegations like conversion are baseless. There is no restriction on any child in this hostel. Hindu and Muslim children follow their respective religions and use their method of worship.” Treeza also reacted over the delay in the opening of the gate that the children did not go out of the hostel on Sundays. There was a delay in opening the gate due to security reasons.

The incident of Madhya Pradesh comes in continuation of two major bust outs on Christian conversion junctions, first in Meerut, followed with Rajasthan and now in Madhya Pradesh’s Damoh. In the Meerut conversion case, as many as nine people were booked for allegedly forcing 400 people to convert to Christianity. The victims had approached the Senior Superintendent of Police (SSP) and complained that they were lured to convert to Christianity.

Another similar incident was brought into light from Rajasthan’s Dhani Bhairava, Vatika village which is just 22 km from the capital city of Jaipur. Reports came in the Christian Missionaries were trying to convert 400 Hindu families in this place and aimed at converting up to 3 lakh Hindus. The Christian missionaries in Rajasthan were reported to have advised Hindus to stop Idol-worshipping; not to follow different observances; not to believe in Hindu Deities and other similar practices. 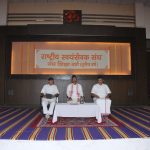