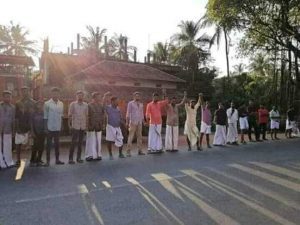 Even as the so-called mainstream and pro-Left media outlets have been claiming that the govt.-sponsored, incentive-intensive Women’s Wall – in some places beneficiaries of job guarantee scheme were paid Rs 500 and govt. staff were given half-day leave, schools were closed – was a big hit, the social media is abounding with videos and photographs showing gaping gaps in the wall. The govt. had spent more than Rs 50 crore taxpayer’s money for the wall.

According to some estimates, only 10-15 lakh people turned up. Interestingly, a survey conducted by Marunadan Malayali, a popular media house, showed that almost all women respondents who participated in the wall were against young women’s entry into Sabarimala.

Brave India News posted photographs of gaps in the wall. However, in some places there was good number of women. In many places women were clueless as to for what they had come, according to some videos doing rounds in the social media.

The Hindu’s correspondent G Anand, a known Leftwinger, stated that most of the women “shared indignation against ‘Hindu right-wing inspired’ misogyny”. But when other channels enquired women about their position on young women’s entry into Sabarimala, a brute majority said they were against young women’s entry.

Dr. MK Muneer, Muslim League leader, said, “This is wall of slavery as many women had come under compulsion and pressure.” There is truth in his claim. The govt. had threatened cancellation of financial assistance to SHGs whose women did not participate in the Women’s Wall. The govt. also had issued a slew of orders to various govt. departments asking women employees to compulsorily participate in the wall. A large number of Muslim women turned up in full body veil which is a symbol of oppression of women. In many places, women said they were there because their husbands asked them to do so. In some locations, men filled the gaps in the women’s wall. The social media is making fun of the plight of the organisers.

Hindu Aikya Vedi leaders said the idea behind the women’s wall organised by misusing govt. machinery is to terrorise the Hindu community.
https://youtu.be/sFE9xCnr5s0

On the contrary, Ayyappa Jyoti organised by devotees was showed the real spirit of women empowerment as almost all the participants were well-informed why they were participating. “There were no incentives or pressure. But still more than 21 lakh people participated.

Leftist outfits organised a wall in Delhi expressing solidarity with Kerala women saw thin attendance with only 10 women taking part in the wall. “There were more mediamen than the number of participants,” said a journalist.