Kerala Governor Arif Mohammed Khan gears up to counter the CPM and Left Democratic Front (LDF) onslaught against him. It is in the light of the media outbursts of CPM and LDF leaders and the Raj Bhavan Siege they have planned for November 15, 2022.

Governor has made it clear that the protestors can only enter the area where protests usually take place. They cannot cross the border of the Security Area. If it is crossed, Chief Secretary and State Police Chief will be summoned to Raj Bhavan (and, obviously actions will be initiated). If Chief Minister and his ministerial colleagues participate in the siege, there will be actions.

Meanwhile Kerala University Senate once again passed resolution against the Governor even though the draft is slightly modified compared to the previous resolution. The meeting rejected the Search Committee formed by the Governor.

Now, it looks like things are moving to a state of a showdown. People of the state are inquisitive to see what steps Governor is going to take against the Chief Minister’s Office with respect to its alleged involvement in the infamous gold smuggling case.

Union Minister V. Muraleedharan told the media that the insults being showered on the Governor are not acceptable. 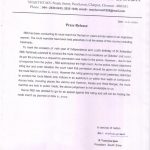