Gurutva or the binding force of this nation is Hindutva 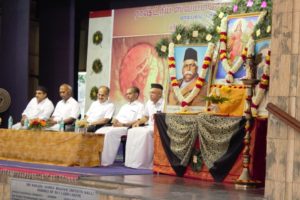 Ponnuswamy Ji(CMD- Pure Chemicals), in his speech shared his personal life experience, ŌĆ£He started his life in Chennai when he was 20 years old and having given up his initial 2 jobs, he went back to his hometown to go back to agriculture farming where immediately he was asked to go back to Chennai to join work. Later he joined his relativeŌĆÖs company his work was open the office at 8.30 in the morning and all his eating issues taken care at the office he would wait till 8.30 at night then lock up the office and leave back home. He later started his own company with just 2 employees now he has 1000 employees working for him. When Chennai was flooded last year he appreciated the immediate help and service done by the RSS volunteers, he himself was awestruck when people wanted to send bed sheets and other essentials from erode-Salem belt for the flood affected victims, the freight van drivers refused to take the freight charges. He also recollected the calamity that struck Andhra Pradesh in 1977 which killed 20,000 people it was RSS volunteers who reached the spot and started doing service quietly without much ado, even before the help could come from the Government. 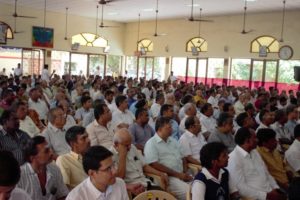 He emphasised through this organization youth of India should be guided properly with extreme care and attention. When he fell sick often when he was young he shared how yoga and meditation helped him to come out of the health issues and the sleepless nights that he had, owing to business setbacks to maintain his balance between home and office lives.

He went on to say, that RAMARAJ, the dhoti company, when they recruit 70-80% youngsters even before they join the work they are sent to a 2 weeks training on yoga and meditation. Those who are coming out of this experience well are taken and for those who find this experience difficult they are not recruited after the two weeks dead line.┬ĀHe wished success and more willing participation of the youth of India in RSSŌĆØŌĆ”..

Replying to the Chair person Ponnuswamy on Sangh by quoting an incident that happened in Delhi Nandakumar Ji narrated – ŌĆ£atrocities and terror that has been unleashed against Sangh and other organizations, wherein prominent Sangh sympathisers too attended, to specifically name a national winner of script writer, novelist Advaita Kala.┬ĀShe is not from Sangh family, brought up in another atmosphere.┬ĀWhile she started her speech in this way many of the intellectuals who are participating here and the media personalities who are participating here, I want to request you to interact with any of the Sangh karyakartas.┬ĀYou have to participate in any of the Sangh karyakram.┬ĀThen only you will find, then only you know what Sangh is.┬ĀAs one canŌĆÖt understand Sangh by mere seeing Sangh karyakram or reading literature, it is only through participating in Sangh, a person can understand Sangh. It is high time for the nationalists or peace loving people to come together and work together for this nation.┬ĀSangh is working for that only.ŌĆØ 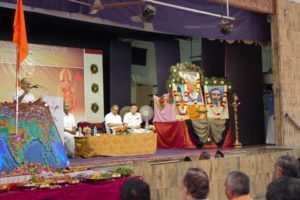 Guru Puja or Guru Dharma or Guru concept is an unique feature of our Hindu traditional culture. Teachers, professors or lecturers can be seen all over in other religions or culture or traditions. But here in Bharat, in our Hindu culture, in our eternal culture, we are celebrating the Guru concept like Puja. Guru is necessary for our polite life or final life or society life or national life. Internally organized life is necessary for every person and that integral point or binding force is Guru.

ŌĆ£Our young generations are stranded at the cross-roads, our young generations influenced by the negative aspects of the western culture, stranded at cross roads, they donŌĆÖt know which way they have to take.ŌĆØ┬ĀQuoting the above words raised from the famous judgement by the three Judges of Supreme Court in a way of faith – Justice Dharmadhikari, Justice Shyama and Justice Shah on the case of implementation of Education policy by the then NDA Government (HRD Minister was Dr. Murali Manohar Joshi) Nandakumar Ji emphasized the need for eternal philosophies, eternal values which have been described in our scriptures which are guided by Guru. Quoting the famous Doha from KabirŌĆÖs poem which describes the importance of Guru who directs us to Bhagwan, he emphasized on the respect to be given to Guru. Guru teaches the path of whole reality, the binding force which leads us to Manushyatva, Man-ness, human-ness.┬ĀThis Gurutva makes a person, King or philosophy Guru.┬ĀPhilosophy can also become a Guru. Person can also become a Guru.┬ĀEven reptiles, animals, sea, ocean can become Guru for ourselves.┬Ā So what is in it that make it Guru.┬ĀThat is Gurutva.

While explaining about Nations and Nationalism, Nationality or the culture Pandit Deendayal Ji quoted the famous IqbalŌĆÖs poem ŌĆ” Hindustan Hamaara. Ancient Egyptian, Roman, Greece culture are said to be extinct now.┬ĀBut that is not the case of this Hindu nation.┬ĀAs Swami Vivekananda said if any of the Vedic Seer or Vedic Muni comes now, he will not see any difference (not in the style of dressing up).┬ĀThe culture, traditions, Vedas, Upanishads, the belief system has not changed. It is eternal and it is prevailing. This is Hindutva.

ŌĆśUppu muthal Karpooram varaiŌĆÖ ŌĆō from Salt to Camphor we have to lead a spiritual life as Karpoora (Camphor) than the material life as Uppu (Salt). Guru joins us with the bigger, larger aspect of life – Akhanda Mandalakaaram- the whole Universe with uninterrupted circle which is going on together.┬ĀOne who connect us with the larger reality, connecting a person with his family, connecting the family with the society, informing the society that you are a part of the nation, saying nation that you are a part of this great humanity, the great universe, the great nature, and at last, Guru will teach you that you are the part of the very God itself, the very primordial force itself. 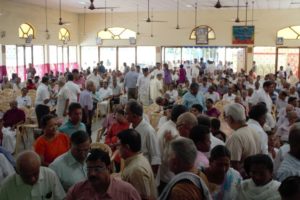 Rabindranath Tagore, the great noble laureate in his Swadeshi Samaaj puts in this way – that to feel unity in diversity, to establish unity amongst variety, it is the underlying Dharma. Dharma is the force that binds us together. Rabindranath Tagore on a specific point ŌĆśWhat is DharmaŌĆÖ? Because of this virtue in Bharat, we shall not get frightened considering any society as our enemy that is our greatness. And again he says what is the reason on why he said so? The Hindus, the Buddhists, the Muslims and the Christians will not fight each other and die in Bharat.┬ĀThey will not die in Bharat.┬ĀWhy?┬Ā Here they will find the meeting point. ┬ĀRabindranath Tagore categorically stating that meeting point will not be non-Hindu, but very specifically Hindu.

So Sangh is also working on that great philosophy. We want to make this great nation greater, greatest and Guru of the whole world.┬ĀFor that purpose we are working, one what basis- this integrating forces, this binding force or gravitational force.┬ĀSo for that purpose, we have put before the society, before Sangh swayamsevaks a symbol which explains all this philosophy as a Guru. That is parama pavitra Bhagwa Dhwaja.

We have to see the Guru as the manifestation of the very Hindutva Shakti, the very Gravitational force that put us together.┬ĀBefore that we have to dedicate ourselves, the whole society should do samarpan before that.┬ĀRenunciation and Service are the national ideals of this nation. It is the shakha that inculcates this great spirit of renunciation and samarpan to strengthen our nation against the danger of dividing forces. With a vote of thanks the function ended.