Vadodara. Addressing an event organised by Bharatiya Vikas Manch in Vadodara, Nandakumar Ji accused the CPI(M) of “conspiring to hack Swayamsevaks to death” in Kerala.

Senior RSS functionary J Nandakumar Ji, who is a national convener of Prajna Pravah, while addressing a function organised by the Bharatiya Vikas Manch blamed the CPI(M)  for conspiring killings of the RSS workers and urged them to extend monetary help to families of poor RSS workers in Kerala, who have been brutally hacked. Dismissing that the attacks on RSS workers are part of the ongoing political turf war between the CPI(M) and the saffron wing, Nandakumar Ji said that despite pact between both political arch-rivals to end the bloodbaths, RSS workers continue to be “executed”.

In his talk titled ‘Kerala : The murder field of Red terror’, he recounted the 1994 attack on Kannur RSS functionary C Sadanandan Master, whom Prime Minister Narendra Modi had invited to his rally in Kasargod last year. “When Prime Minister Narendra Modi came to Kerala for a campaign, last year, he addressed a rally in Kasargod. There was no event in Kannur but Modiji specifically asked for Sadanandan Masterji to be called to the event. Sadanandan was a staunch Marxist worker in his young days. He joined the RSS later, which angered the Marxist so much that they finalised henchmen to cut to size a 6.2 feet magnetic personality by chopping his legs. I am recounting this incident in great detail because it shows that these attacks are planned. When people die in a spontaneous clash or accident it is different, but the Marxists are planning attacks on RSS workers,” he added.

Stating that Kerala has become the “epitome of intolerance”, he said that 286 RSS workers have been brutally murdered so far, including women workers and mothers of RSS functionaries. Nandakumar Ji said, “For those who shout from rooftops that RSS is intolerant should come to Kerala to understand what intolerance is. You cannot understand the heat of the Marxist intolerance by coming to walk along the Kovalam beach or houseboat in Allepy. Come to Kannur. But don’t say that you are from Gujarat, which is Modi’s home state. They will consider you as a BJP person by default.”

Attacking CPI(M) leaders like Sitaram Yechury, Prakash Karat and Brinda Karat, Nandakumar Ji said, “When Modiji highlighted the case of Sadanandan Masterji and Yechury was questioned about the killings in Kerala, which is administered by the CPI(M), Yechury said it was a retaliation from common people as the RSS workers were attacking minorities. They portray an image as if the RSS kills Muslims and Christians before each meal every day. I want to ask Yechury and others, which political rally of the CPI(M) or another party has the RSS attacked. Which minority has been attacked by RSS for this retaliation?”

Nandakumar Ji said that the RSS is collecting money to rebuild homes of functionaries, who have been attacked and are currently in the RSS camps in Kerala. Urging the like-minded to “imagine” the amount of funds needed to help the RSS functionaries, some of whom are also from Dalit families, Nandakumar Ji said his intention was not to coerce contributions. “I am not telling you these stories to beg for money, but we have to think what they are going through. We are doing work there, but we need your support. You are not physically needed there, but families like Rajesh’s need your monetary support,” Nandakumar Ji said. 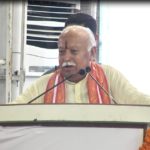