New Delhi. ABVP demands a high level enquiry into the gangrape and death of the 25 year old woman who had gone to participate in farmers’ protest. COVID-19 is being cited as the alleged reason behind her death, this claim and attempt of hiding the incident of gangrape by political persons must be investigated.

ABVP condemns the gruesome gangrape of a participant by leftist and separatist leaders in the guise of farmers’ protest. We reiterate our demand of strict punishment according to Indian Penal Code for the perpetrators.

The farmers’ protest against the Farm Bills has been going on at the Tikri border for several months now. The victim had come all the way from Bengal to participate in this protest, where the communist leaders under the garb of farmers, assaulted her sexually. Top leaders of Sanyukt Kisan Morcha including Yogendra Yadav were sitting on the news of this gangrape, they deliberately wanted to hide it. Police has registered a case against 6 people, of which Anoop Singh Chaanot and Anil Malik are active members of one political party. ABVP demands immediate action and severe punishment to the perpetrators.

National General Secretary of ABVP Nidhi Tripathi said, “This so called farmers’ protest is being used as a shield to assault women, and it is happening under the evil protection of the Leftists leaders. Trying to hide such a grave crime and not taking an action is absolutely condemnable. ABVP demands strict legal action against the perpetrators as well as the leaders who attempt to white wash such inhumane acts.” 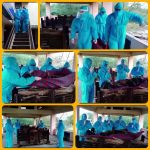