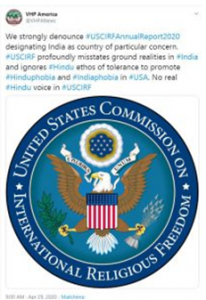 New Delhi. The Hinduphobia of USCIRF is nothing new but the organisation has repeatedly tried to target India over so-called religion freedom. In its annual report of 2020, the USCIRF alleged that religious freedom in India witnessed a drastic downward turn and recommended that the US State Department designate India as a “Country of Particular Concern”. On Tuesday, the Ministry of External Affairs in a press release slammed the US body for its “biased and tendentious” observations on India.

In a statement, External Affairs Ministry spokesperson, Anurag Srivastava, said the commission has reached new levels of “misrepresentation”. “We reject the observations on India in the USCIRF Annual Report. Its biased and tendentious comments against India are not new. But on this occasion, its misrepresentation has reached new levels. It has not been able to carry its own Commissioners in its endeavour. We regard it as an organization of particular concern and will treat it accordingly,” the statement said.

The worthlessness of the USCIRF report can be understood by the fact that it has clubbed India with Islamic countries like Pakistan, Saudi Arabia, Iran, Tajikistan, Turkmenistan and Communist countries like North Korea and China. 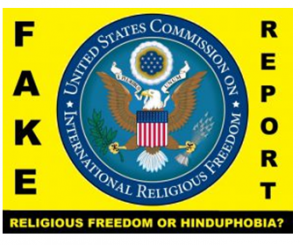 The blatant lies and misrepresentations in the USCIRF report can be gauged by its understanding of the Citizenship Amendment Act (CAA). Without even knowing the complete details of the CAA the USCIRF chose to toe the line of fear-mongers and anti-India forces as it describes CAA as “potentially exposes millions of Muslims to detention, deportation, and statelessness when the government completes its planned nationwide National Register of Citizens”. The USCIRF does not even know that the NRC has not even been discussed and the CAA does not affect any India citizen be it of any religion.

The USCIRF annual report also misreports the Delhi Anti-Hindu riots and blames only Hindus and police without even mentioning the numerous crimes of the Muslim leaders, Mullahs who instigated mobs and the killing of Hindus during the riots. The report does not mention the attacks on Hindu neighborhoods by Muslim mobs and the brutal murders of many Hindu police officers and common people.

Such mischiefs of the pro-Islamist and Hinduphobic USCIRF have been repeated year on year and India has rightly rejected their absurd claims which are full of lies and insinuations. In Dec 2019, when the same USCIRF had tried to meddle in India’s affairs using CAB (before it became an Act), it got a scathing rebuttal from MEA. The MEA has called out the USCIRF for it’s inaccurate and unwarranted comments on CAB. The MEA statement had said that the agency has chosen to be guided by their prejudices and biases on which they have little knowledge and no locus standi. 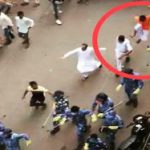