Shri Guruji believes that women had a very vital role in bringing about social cohesion and also in building up character in the society. For this, what was necessary was to emulate the heroic examples of womanhood in our history. It was not necessary nor is it advisable to borrow foreign models, which have no relevance in our country. On the contrary it will only disrupt our society and destroy our values. Two role models of women who could be emulated with great advantage, often quoted by Shri Guruji are ‘Vidula’ and ‘Savitri’. About ‘Vidula’ he says, “There is a beautiful anecdote narrated in Mahabharata. There was a queen by name ‘Vidula’. She sent her son Sanjay to the war-field but the fellow became nervous and terror-stricken. 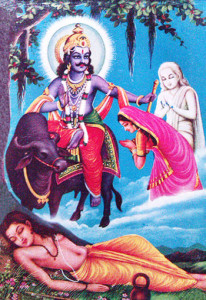 He turned his back to the enemies and galloped to his capital. When Vidula saw her son in that crestfallen state she closed the entrance to the fort and severely chastised him. The conversation between the mother and the son has become famous as Vidula-Sanjay-Samvad, wherein Vidula instructs her

son as to how a brave warrior should conduct himself on the battlefield. She then orders him to go back to war and return as a victorious hero. As the story goes, Sanjay sallied forth into the battlefield, displayed exemplary valour and came back to be received by his mother with honour. The words of Kunti when the five Pandavas came to seek her blessings before proceeding to give battle are remarkable for their heroic tone. She says:

(The moment has arrived for which Kshatriya mothers give birth to sons. Lion-hearted men are not cowed down in the face of enemies.)

“I am sure, if our mothers make a resolve to uplift the society, then there is no power, either in this world or the other, which can defeat them. The ideal of Savitri, before whom even the Lord of Death accepted defeat, is before them. May they all invoke within themselves such single-minded devotion to the ideal, such purity of character and such peerless heroism! Once we do this, I am sure, the long night will pass and a new dawn will spread its golden hue over the horizon of not only Bharat but over the entire world with the renewed effulgence of our Dharma”.

There is one more couplet in Mahabharata which says: May no woman give birth to one who would mutely suffer insults, who is devoid of vigour and manly prowess and one who would bring joy to the enemies”.

With the great qualities of Motherhood ingrained in them women could play a tremendously effective role in transforming the society, even working well within the limitations imposed on them by their domestic responsibilities. Shri Guruji suggested that “They could establish useful contacts among the womenfolk in their own nighbourhood and carry out programmes which would inculcate our cherished ideas among them and their children. The spirit of mutual help and service would also have to be made popular through our day-to-day social intercourse. Our womenfolk should not be allowed to develop inferiority complex or a feeling of helplessness. They should be taught that they are the living emblems of Parashakti. There are quite a few of our educated mothers who have spare time and energy, which is often wasted in gossip or fashionable clubs. Here is one useful hint for them. There will be many small boys and girls in their nighbourhood who do not go to schools. They can make such children gather either in their own house or in some other convenient place and engage them in games, stories, songs, etc”. Though the duty and responsibility of looking after the home and preserving its purity and sanctity mainly rested on the women along with the inescapable commitment to bring up children in an ideal way, Shri Guruji believed that women have a special role to the society for which they are eminently fitted. He was neither a votary of seclusion of women nor and advocate of modern feminism. He wanted women to be well educated and socially oriented. He has given certain tips, which could be well absorbed and regularly practiced by our enlightened Mothers and

Sisters. “Literacy campaign among women is one more important programme, which our educated mothers alone can successfully tackle. But here also, inculcating noble samskars in them should be given the priority; teaching of alphabets should come second. In order to do this, instill in them a spirit of pure devotion to our motherland, faith in our Dharma and pride in our history. Show them the map of our sacred Motherland, the holy streams and mountains, the Tirthas and Temples stretching right from the Himalayas to Kanyakumari. Introduce them to the rich variety of our national life in language, literature, art and social traditions. Thus make them become intimate with the true spirit of our national being”.