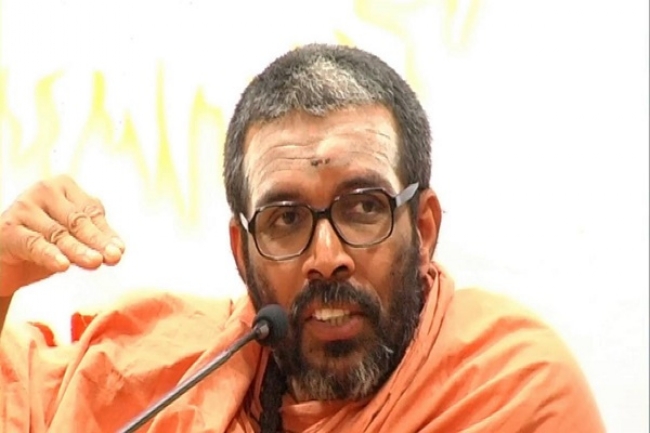 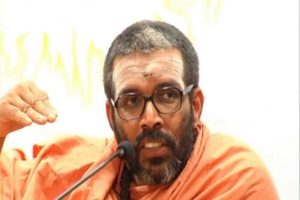 New Delhi. The Kerala Chief Minister and other CPM ministers must refrain from spreading blatant lies and canards about the Sabarimala movement, said Swami Chidananda Puri, Chief Patron of Sabarimala Karma Samithi, in New Delhi on January 08. He was addressing a press gathering organised by All India Sabarimala Action Council (Akhil Bharatiya Sabarimala Karma Samithi) at Constitution Club, New Delhi, intending to lay bare the state-sponsored atrocities against the Ayyappa devotees in the guise of implementing the Supreme Court verdict and elucidate on the facts about Sabarimala temple tradition.

The Chief Minister of Kerala Pinarayi Vijayan propagated outright lies to cover up the facts and protect his party men. In the brutal incident of stoning Chandran Unnithan, an Ayyappa devotee to death in Pandalam, Pathanamthitta, the Chief Minister told media that Shri Unnithan died of heart attack. The Chief Minister got his version published in the media even before post-mortem, Swami Chidananda Puri said. He also said that the Chief Minister Vijayan peddled fake news that a young woman from Sri Lanka entered into the temple. Adding insult to injury, citing this fake news, the Chief Minister challenged the Hindu believers to call for another strike against the violation of traditions in Sabarimala. Another minister in the state cabinet, G Sudharkaran insulted and made slanderous remarks against the Sabarimala Tantri (Chief Priest) and other priests. The Chief Minister and other Communist ministers must stay back from challenging and provoking Hindus in the state, Swami Chindananda Puri added.

Answering to the questions, Swami Chidanta Puri said that no women devotee in the age group of 10 to 50 has ever attempted to enter the Sabarimala temple after the Supreme Court judgement of September 28, 2018. If you go to a temple as a devotee, you are bound to obey the customs and systems of the temple. As far as Sabarimala temple tradition is concerned, the deity Ayyappa himself has stipulated some conditions and every devotee is bound to obey it.”

Swamiji also requested the media to understand the reality about the Sabarimala issue. Explaining the Karma Samithi’s stand, Swami Chidanantha Puri said that the Sabarimala movement is not against women or women’s rights. It is all about unique temple traditions being practised all across Kerala. Citing the example of Payyannur Sri Subrahmania Swamy temple, he said that no Sannyasis are allowed to enter the temple premises as it is against the customs and systems of the particular temple. In renowned Mannarasala Temple, the chief priest is a woman. In Chengannur, Kerala, Hindus celebrates a rare menstruation festival for Goddess Parvathy Devi in which men are not allowed. Only women perform Attukal Ponkala, a major ritual in Attukal Devi Temple, whereas men are not allowed in the temple premises on the particular day. Such restrictions cannot be seen as anti-men and infringements upon the fundamental rights of men. The Sabarimala traditions are also to be viewed in the same manner. The Hindus have been following such customs and practises since the time immemorial. Killing such traditions mean wiping out diversities, he added. “Women are not allowed in the tens of thousands of Mosques across the country. We do not want to question their belief, but those who cry foul over the customs and practises in Sabarimala and concerned about women’s rights keep mum about this,” Swami said.

A statement issued by the Sabarimala Karma Samiti said that the law and order situation in Kerala has totally collapsed due to the various actions taken by the Chief Minister of Kerala, Sri Pinarayi Vijayan. Right from the beginning of the Sabarimala issue, the Marxist party and the CM has been taking a stand to politicise the issues for their benefit.

“The state government’s policy in this regard has been to destabilise the Hindu religious practices, temples and such other spiritual institutions so that Hindus are demoralised and to divide the Hindus into various factions. This is to appease a section of minority communities so as to get their political support. The Marxist party for quite some time has been taking a very soft stand towards Muslim extremism due to which Kerala has already become a breeding ground for extremists, both domestic and international. IS terrorists have established deep roots in the Kerala and reports regarding massive recruitment into IS are plenty. Considering these political approaches of the Marxist party it is very evident that their continuous efforts to demoralise and divide Hindus are again being reflected in their stand in the Sabarimala issue,” the statement read.

The Samiti alleged that the Kerala Chief Minister is determined to implement the Supreme court order, which even the Honourable Supreme court has decided to review on January 22, 2019 in an open court, in order to achieve their above-mentioned intention, and to achieve that he has been trying to bring in anyone, irrespective of the fact whether they are devotees or not. All the young women who tried to enter Sabarimala with the help of the Police were either non-believers or extremists.

Inviting the attention of the Union Government to the Constitutional breakdown in Kerala, the Sabarimala Karma Samithi demanded the Union Government to take all appropriate steps, to establish the rights of the devotees of Sabarimala Temple and save Kerala and its people from Police Raj. “The link between the Marxist party especially CM Pinarayi Vijayan and the Muslim fundamentalists and extremist groups need to be probed by a central agency, such as the National Investigation Agency, immediately. The Chief Minister Mr Pinarayi Vijayan should resign immediately and apologise to the people of Kerala for his actions against the Hindus and Sabarimala devotees in particular and also for the deteriorating law and order situation in Kerala,” the statement further read.

Sabarimala Karma Samithi organising secretary A R Mohanan, general secretary S J R Kumar also attended the press conference. They also demanded a free and fair inquiry into the sporadic violence took place on the hartal day which was called by the Karma Samithi. CPM and Islamic extremist outfit PFI had jointly unleashed violence on Hindus on the Hartal day and tried to create a ruckus throughout the state.