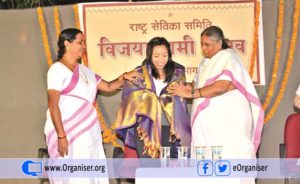 She posed a pointer to the so-called human rights organisations as to why they fail to raise their voices on violation of human rights of innocent persons. She appealed to all to remain vigilant for internal security. She praised Meera Chanu who won accolades for the country in weightlifting.

Meera Chanu said it was her mother’s wish that she should bring a medal for her country. To fulfil her mother’s dream she came to this field of weightlifting and won the medal. She stressed that support from the family was must for all those who want to work in various fields. Earlier, the Sevikas demonstrated yogasana, danda and drill.