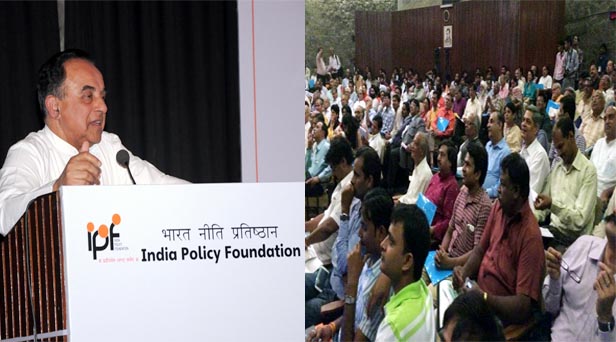 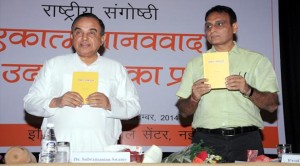 New Delhi. The challenge of the day is to convert Pt. Deen Dayal Upadhyay’s ideology of Integral Humanism into actual practice. It was the common voice of all learned speakers of a seminar on the topic ‘Integral Humanism — a Response to neo-Liberalism’ organised by India Policy Foundation (IPF) here on September 25, 2014, at the India International Centre (IIC). The seminar was held to commemorate 98th birth anniversary of Pandit Deendayal Upadhyay, one of the renowned thinker, RSS Pracharak and a top leader of the erstwhile Bharatiya Jan Sangh. 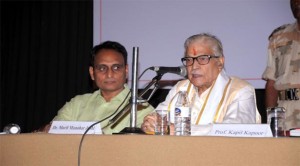 Deendayal Upadhyay is known for his holistic philosophy of Integral Humanism. Inaugural session began with the lighting of the traditional lamp following by rendering of devotional songs by students. Inaugurating the proceedings, Dr. Sheila Rai, professor at the University of Rajasthan introduced the speakers on stage for the inaugural session namely, Dr. Subramanian Swamy, senior BJP leader and economist, Dr. Gautam Sen, academic, scholar and writer and Prof. Rakesh Sinha, Honorary Director of India Policy Foundation. The republished edition of the late Pt. Deen Dayal Upadhyay’s novel Samrat Chandrgupt was also released on the occasion. 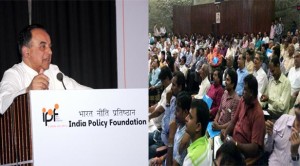 Prof. Rakesh Sinha, Honorary Director, India Policy Foundation, introducing the purpose of the seminar, said that it was much more than mere commemoration of Pt. Deen Dayal Upadhyay’s birth anniversary. Ideologies like individualism, liberalism, capitalism and communism, all of which emanated from the West, still held sway over the colonized Bharatiya minds, resulting in the vast majority of people being excluded from any meaningful discourse. There is an urgent need to expand the process of debate and discourse to make it more inclusive. Neo-liberalism, born out of liberalism and capitalism was like a “baby born with pregnancy”, said Prof. Rakesh Sinha, explaining that Pandit Deen Dayal Upadhyay’s holistic vision of integral humanism contained Bharat’s ancient wisdom that contained answers to many burning issues of the present age. 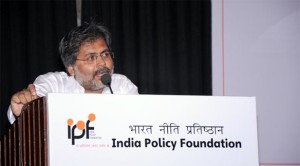 Dr. Gautam Sen, a distinguished scholar, academic and write, formerly of the London School of Economics and now an advisor to the Bharat Sarcar explained Pt. Deen Dayal Upadhyay’s ideology of integral humanism as belonging to the hallowed tradition of the great seers of Bharat like Adi Shankaracharya and Swami Vivekananda. He said that Pt. Deen Dayal Upadhyay recognised the power of Bharat’s ancient wisdom, and his vision of integrated humanism was a powerful rationale for return to Bharatiya values. However, his was not a mere call for escapism into the past, but revival of Hindu traditions and knowledge while being firmly rooted in modern realities and developments.

Veteran BJP leader, former Professor of Economics and renowned nationalist crusader Dr. Subramanian Swamy, holding forth on the Pt. Deen Dayal Upadhyay’s contribution to political thought, stressed on the need to create an alternative socio-political ecosystem, as all Western ideologies, which are one or another dimension of materialism, have failed in addressing the growing crisis of humanity. Bharatiya ethos and traditions are fundamentally different and Pt. Deen Dayal Upadhyay was among those who recognized the fact that it contains solutions to problems the unbridled materialism of the West has given birth to. Dr. Swamy forcefully called for the de-Nehrufication of society, economy and the polity.

Ramesh Patange, well known writer, thinker and former editor of Marathi weekly Vivek, stressed the point that nationalism ought to be synonymous with social justice and social harmony, something which Pt. Deen Dayal Upadhyay alluded to in his ideology. Executive editor of Hindi news channel Aaj Tak, Punya Prasoon Bajpai, said that successive governments have failed to create any ecosystem that can address even the basic needs of common citizens.

Prof. Ashok Modak, renowned academic and former professor in Mumbai University, while deliberating upon Pt. Deen Dayal Upadhyay’s vision, stressed the need to reconsider the entire paradigm of development from a nationalist perspective. Prof. Raj Kumar Bhatia, president of the National Democratic Teachers Federation and former president of the Akhil Bharatiya Vidyarthi Parishad said that adequate justice had not been done to the visionary contribution of Pt. Deen Dayal Upadhyay, and requested the India Policy Foundation to take the initiative in the publication of his works.

In the third session of the seminar, Prof. N.N. Sharma, Chairperson, India centre for Public Policy, said that Pt. Deen Dayal Upadhyay’s ideology was truly holistic, going beyond the confines of sectarianism. Prof. Sharma said that the categorization of politics into Left and Right is largely a construct of the West, particularly 19th century Europe and has little relevance in Bharat. Eminent thinker and educationist Pushpesh Pant cautioned against making the subject of integral humanism a mandatory part of any academic syllabus, as that would be the surest way to ensure its demise. He said the nation ought to free itself of colonial and dominated mindsets, if it has to attain success in making integral humanism a reality.

Prafulla Ketkar, editor of the national weekly Organiser said that there never has been any relevance of the concepts of Left and Right in our nation and society. Western and European thought rests on certain divisive premises, which have also divided Bharat badly. Bharat’s thought is integrationist, which is well articulated by Pt. Deen Dayal Upadhyay’s integral humanism.

Economic thinker and IPF trustee Gopal Agrawal delivered a brief exposition of Pt. Deen Dayal Upadhyay’s ideology, and said that Western ideologies like capitalism and free markets, which the West has tried to impose upon the world, have themselves found to be badly wanting in the face of the global economic crisis that hit the world markets and the economies of nearly every country. This has forced them to dilute their own ideological dogmas. An integrated and holistic approach is today’s need, which integral humanism elucidates clearly. Former IAS officer and BJP member from Kerala, K.J. Alphons, noted for his fearlessness in taking on the high and mighty in his drive to implement corruption-free governance, commended the IPF for this seminar on integral humanism, and said that the challenge of the day was to convert Pt. Deen Dayal Upadhyay’s ideology into actual practice.

In the valedictory session, Prof. Kapil Kapoor, former pro-VC of the Jawaharlal Nehru University (JNU), said that liberalism began as a British tool to escape the upheaval the French Revolution had brought and to bring in “revolution by law”. Prof. Kapoor said the hold of Western colonialism, which began from Raja Ram Mohan Roy and continued beyond Jawaharlal Nehru, had to be demolished if Bharat was to make progress rooted in its own ethos, which is the message of Pt. Deen Dayal Upadhyay’s integral humanism.

Veteran BJP leader, former HRD minister, thinker and writer Dr. Murli Manohar Joshi, in his valedictory address briefly outline the Western philosophical origins of present-day science and scientific thought. The compartmentalised approach of Western society to science, society and family, Dr. Joshi said, was responsible for the present crises confronting the world, which range from breakdown of the family, climate change, economic crisis and terrorism. It is Pt. Deen Dayal Upadhyay’s integral humanism, firmly rooted in Bharat’s holistic and inclusive tradition of Vasudhaiva Kutumbakam (the entire world is a family), which can show a path out of the crises the world is faced with, which threaten humanity’s very existence. Around 500 people from different walks of life attended the seminar. 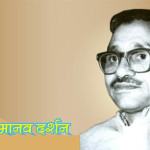 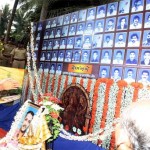