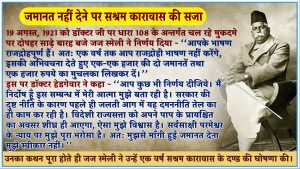 Dr. Keshav Baliram Hedgewar is primarily known as the founder of the RSS, the largest voluntary movement in the world. But there are some aspects of Dr. Hedgewar’s personality, such as his involvement in the freedom movement, that are unknown to the world. He joined the movement at a young age and was influenced by the firebrand nationalism of Lokmanya Tilak.

Keshav studied in Nagpur, Yavatmal, and Puna, before leaving for Calcutta in 1910 to study medicine. He also became a member of the Anushilan Samiti, a well-known group of freedom fighters. In May 1921, Hedgewar was arrested on charges of “sedition” for his “objectionable” speeches in Maharashtra. The hearing of the case began on June 14, 1921. After a few hearings, he decided to plead his own case and read out a written statement on August 05, 1921. After hearing it, Justice Smelly said: “His defense is even more seditious than his original speech!” In his August 19 judgment, the judge ordered Dr. Hedgewar to give an undertaking in writing that he would not deliver seditious speeches for one year, and furnish a bail bond of ~3,000.

Dr. Hedgewar’s response was terse: “My conscience tells me that I am completely innocent. A policy of repression would only add fuel to the fire already raging because of the government’s vicious policies. I am convinced that the day is not far off for the foreign regime to reap the fruits of its sinful actions. I have faith in the justice of the Omnipresent God. I, therefore, refuse to comply with the order for bail.”

As soon as he finished his reply, the judge sentenced him to one-year rigorous imprisonment. Dr. Hedgewar went outside the court, and addressed a large gathering. “As you are aware, I have defended myself in this case of sedition against me. However, these days, there is an impression going round that arguing in one’s defense is an act of treachery to the national movement. But I feel it is highly unwise to merely get crushed like a bug when a case is foisted upon us. It is our duty to expose to the whole world the wickedness of the foreign rulers. That would indeed be an act of patriotism. And not to defend ourselves, on the other hand, would be a suicidal policy”.

He added: “You may, if you so choose refuse to defend yourself; but for God’s sake don’t consider those who disagree with you as being less patriotic. If in the course of our patriotic duty we are called upon to enter the prison or be transported to the Andamans, or even face the gallows, we shall have to willingly do so. But let us not be under the illusion that jail-going is all in all, that it is the only path for achieving freedom. There are, in fact, so many fields of national service awaiting us outside the prison. I would be back amongst you after one year. Till then, of course, I will not be in touch with the national development, but I am confident that by then the movement for ‘Complete Independence’ will have gained added momentum. Now, it is no more possible to keep down Hindusthan under the heels of foreign domination. I offer my gratitude to you all and bid you good-bye.”

On Friday, August 19, 1921, he was moved to the Ajani jail. That evening a public meeting was convened to honour him in absentia. Barrister Govindrao Deshmukh presided over the meeting, and the speakers were BS Moonje, Narayanrao Harkare, and Vishwanath Rao Kelkar. All spoke warmly about Hedgewar. He was released in July 1922, and the same evening a public reception was organised for him. Senior Congress leader Motilal Nehru and Hakim Ajmal Khan addressed the gathering.

When the Congress adopted a resolution proclaiming Samprana Swatantrya (complete independence ) as its goal, Hedgewar wrote to the shakhas: “This year the Congress has passed a resolution declaring Complete Independence as its goal. The Congress Working Committee has called upon the entire nation to celebrate Sunday the 26th of January 1930 as Independence Day. We of the Sangh are naturally immensely happy that the All-India Congress has endorsed our goal of Complete Independence. It is our duty to co-operate with any organization working towards that goal … It is therefore suggested that all the Swayamsevaks of each Shakha meet at 6 p. m. on Sunday, 26th January 1930, at the respective Sanghasthans. After offering salutation to the National Flag, i. e. the Bhagawa Dhwaj, the concept of Independence and the reason why this ideal alone should be kept before every one should be explained. The function should conclude with an expression of congratulations to the Congress for having accepted the ideal of Complete Independence.”

As a result of this circular, all RSS shakhas observed independence day. Hedgewar was again imprisoned for leading a satyagraha movement at Yavatmal, Maharashtra. He was awarded six months’ rigorous imprisonment and three months’ simple imprisonment (July 1930 to February 1931) for leading the movement.

One thought on “It is time to recognise Dr. Hedgewar’s contribution to the freedom movement”