Bengaluru. Venkatesh, a Dalit was attacked with sharp weapons by a Muslim couple and an auto-rickshaw driver as he objected to their stealing a calf for slaughter. The incident which happened in Kodihalli village in Kuduru Hobli of Karnataka as reported by Kannada newspaper Vijayavani.

On May 17th, Venkatesh was sitting in front of his house when his neighbour Nasrullah Khan and his wife Zarinabi alighted from an auto-rickshaw. He noticed legs of a calf from a large sack which was being unloaded. Being suspicious of their motive given the way the couple tried to surreptitiously take the calf inside, Venkatesh questioned them on their purpose of bringing the calf in a sack.

Enraged by mere questioning, Nasrullah Khan and Zarinabi started to abuse him in response. When Venkatesh asked them if they have brought the calf for slaughtering, the auto driver Barkhat too joined the Muslims couple in attacking him. As the quarrel continued, Nasrullah Khan went inside the house and brought a knife with which he tried to stab and murder Venkatesh.

An alert Venkatesh escaped the repeated attempts to stab him but received injuries on his left hand and shoulder. The auto driver Barkhat escaped from the location. A complaint was registered and the local police have arrested Nasrullah Khan and Zarinabi in an attempt to murder case. Venkatesh is being nursed in a nearby hospital for the injuries. 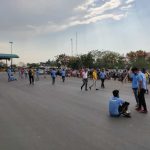 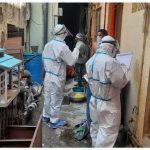