Kochi. Noted Jurist V R Krishna Iyer, who championed the cause of the downtrodden throughout his life, was cremated with full state honours after a galaxy of politicians led by Chief Minister Oommen Chandy and those from the legal fraternity paying their last respects on Friday, December 5.

After the customary gun salute by police, Justice Iyer’s two sons Ramesh Iyer and Paramesh Iyer performed last rites amidst chanting of vedic hymns. The body was then shifted to the LPG fired crematorium for the final journey. Justice Iyer passed away at a private hospital in Kochi on Thursday, December 4.

Earlier Chandy and his ministerial colleagues were among the thousands of mourners who paid their respects. The body was kept at the Rajiv Gandhi Indoor Stadium from around 9.30 am to 4.30 pm to enable public to pay homage.

Twenty-five visually challenged students of a blind school from nearby Aluva along with their teachers also came to bid adieu to Iyer. Arbutammal, mother of Perarivalan, an accused in the Rajiv Gandhi murder case, was also in Kochi to pay her respects. Justice Iyer’s body was then was shifted to his residence, ‘Satgamaya’ to enable the family members to perform various rites. 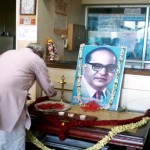