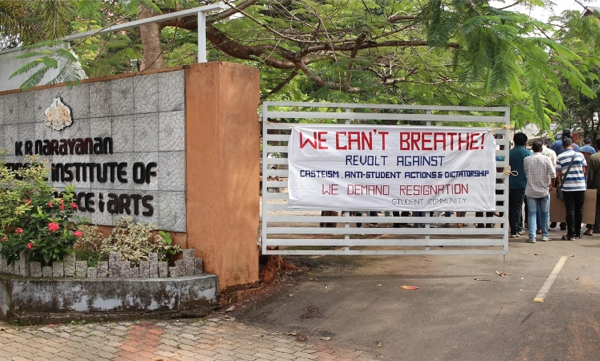 Kerala (VSK). Sankar Mohan, Director of K.R. Narayanan National Institute of Visual Science & Arts Film Institute under the Department of Higher Education, Government of Kerala (KRN Film Institute), resigned on January 21, thanks to the student protests and agitations against the blatant caste discrimination under his regime. SC/ST students are denied the education benefits they are entitled to. Reports suggest that Adoor Gopalakrishnan, Chairman of the Institute as well as world famous film maker, is likely to resign soon. He is alleged to have tried to protect Sankar Mohan, from the controversies and students’ wrath. The resignation has come close on the heels of K. Jayakumar Commission’s report that students’ complaint regarding caste discrimination was right.

Students and employees had raised 13 charges against Sankar Mohan including blatant caste discrimination, sabotage of reservation rules, etc. They have been demanding action against the Director who allegedly maligned even the goodwill of former President of Bharat late Dr. K.R. Narayanan. Director’s resignation has occurred on the 48th day of the student agitation.

The incidents which led to Sankar Mohan’s resignation have taken place in a state where CPM-led Left Democratic Front rule. CPM and its coalition partners have been talking on top their voice that they do not believe in religion and caste. The commission’s report vindicates the allegations of the students and the employees. It is a heavy blow to both LDF regime and also Adoor Gopalakrishnan. The Commission consists of former Chief Secretary K. Jayakumar and former Legislature Assembly Secretary N.K. Jayakumar.

It is alleged that cleaners, especially those who belong to ‘reservation communities’ in the Institute are always deployed for the household duties of the Director. The agitators have demanded to publish the enquiry reports pertaining to the caste discrimination. They maintain, even though Director Sankar Mohan has resigned, their agitation would continue until reports are published and strict actions taken. K. Jayakumar-led enquiry commission’s report had been submitted before the government several days ago.

Serious allegations had been levelled against Sankar Mohan on November 25, 2022. Employees of the Institute were asked to do the household duties for the Director. Another allegation was the rule set by the Director for compulsory shower of the employees before they enter his home premises for the household duties. Three sweepers, including 32year old woman complainant, were recruited in February, on daily wage basis. Those sweepers had to carry an extra pair of clothes when they go to Director’s house for household duties; they had to have wash in the outdoor washroom before they start the work. It is reported that an employee in the administrative section had submitted a complaint, before the Chief Minister, of similar grievance. But, it fell on deaf ears. But, the government was keen to protect the Director hence his resignation is a set back to the government.

When the students took a stand that they would not to give up their agitation until Director quits, the government assigned Chairman Adoor Gopalakrishnan to protect Sankar Mohan. But, it led to further controversies and Institute was closed. Then government appointed two enquiry commissions; idea was an eye wash to pacify the students and to protect the Director. As the enquiry reports were not as the government wished, Sankar Mohan had no other alternative than to resign. But, the Director comes out with a strange sort of argument – ‘Three- year tenure was over and a further one-year extension was over too hence the resignation’. But, students were not the takers. They are aware of a government order that Sankar Mohan can continue until the new Director takes over. They say, ‘they are ready to turn “Rohit Vemula” if that is what Government of Kerala wants’.

Therefore, students say that Director’s resignation would not stop their agitation. They allege that CPM and LDF are supporting caste discrimination. They will fight until solutions comes up to all issues they have raised. BJP, ABVP and several other organisations have come forward to support them. 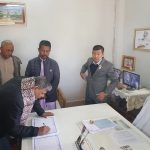 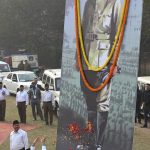