Kerala. CPI(M) State Secretary, MV Govindan, said that his party has never told that Muslim League is communal party. We can join hands with anyone in the fight against communalism, but that doesn’t mean that it is a political alliance.

MV Govindan said that Muslim League is a party working on democratic lines and that the communist party have worked alongside League during the time of seven-party alliance.

Meanwhile, Saji Cheriyan responded that his future will be decided by the party. While speaking to the media, the former minister said that the court’s verdict on the plea against him is good and that he is happy about it. 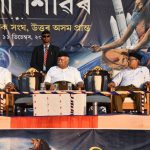