Kerala High Court has intervened in the case of the Devaswom guard’s rude behaviour towards the devotees who visited Sabarimala on Makaravilak day. The court directed the Devaswom Commissioner and the police to submit a detailed report on the incident.

A division bench comprising Justices Anil K Narendran and PG Ajit Kumar considered the matter. The High Court observed that the behaviour of the Devaswom guards towards the pilgrims who came for darshan was extremely rude. The court’s intervention comes after the footage of devotees being forcibly pushed away came to light.

The controversial incident took place in the evening on Makarjyoti day. Manakkad Devaswom Watcher Arun Kumar was the one who grabbed the pilgrims who had reache. Arun Kumar is the leader of the Travancore Devaswom Employees Confederation, a CPM union. Controversy arose after the incident and the Devaswom Board, yielding to pressure, transferred the accused guard.

At the same time, the Travancore Devaswom Board informed that no further action will be taken against the guard. There is impropriety in the behaviour of the guard who shouldn’t have behaved like that. But the crowd was beyond control. Devaswom Board President K. Anantha Gopan informed. 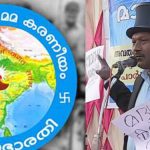