Kerala. In yet another incident of a Muslim cleric abusing women, Siraj-ul Balussey has triggered massive controversy by calling ladies in good costume ‘prostitutes’. He said that ladies using perfume are interested in prostitution. He added that these ladies use perfume to attract other men. Any lady who doesn’t like the touch by men other than her husband won’t use perfume; Siraj-ul’s rant goes on.

The Muslim cleric also said that the Muslim women should call Allah during their works. Women following this will attain Jannat, he added. The video is posted by Siraj-ul on his Facebook page and as usual no action is initiated against him for making such cheap anti-women statements. 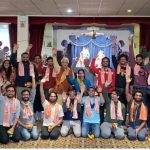