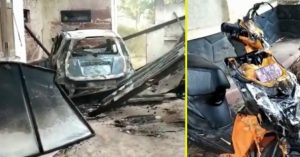 Kerala. The anti-CAA protests are turning communal in Kerala as Communist-Islamist nexus have been consistently targetting RSS-BJP workers and their families in the name of the agitation. In yet another incident, suspected CPM-PFI workers attacked the houses and vehicles of RSS-BJP workers in Kodungallur.

In the attack, several houses were destroyed and vehicles were set ablaze. Properties including bus waiting sheds, sports clubs and flag posts of Hindu organisations were also attacked. The attack took place in the night after Bhim Army chief Chandrashekhar Azad spoke at an anti-CAA meeting organised by PFI and other radical Islamist outfits at Areekal beach, near Kodungallur. As per reports that the frenzied Islamist mob ran riot in Kodungallur and surrounding areas on the same night following the meeting.

Among the vehicles set on fire were two Royal Enfield Bullets, a Maruti Ritz car, a Yamaha Scooter and Chevrolet Tavera car. The assailants also set ablaze an arts and sports club and a bus stop shelter.

The local police have registered a case in connection with the incidents. As per the reports,¬Ýthe PFI programme attended by Chandrashekhar Azad did not draw many crowds and it provoked the radical Islamist groups. The local residents suggest that the Jihadi elements backed by Communists have been trying to instigate communal riots along the coastal area of Kodungallur for a long time.

In the Jihadi attack, BJP worker Unnikrishnan‚Äôs house and motorcycle were attacked and set on fire. Another BJP worker and Panchayat member Suresh‚Äôs vehicle was also attacked. The frenzied mob also torched the car of Anil Kumar, another BJP worker in Kodungallur. The assailants also attacked the house where RSS Prant Karyakari member Valsan Thillangeri stayed for a day when he came Kodungallur to speak in a public programme in support of¬ÝCAA. The vehicles here were also set ablaze. The assailants mainly targeted the houses and vehicles of those who participated in pro-CAA programmes organised by Citizen Forum in Kodungallur.

Incidentally, Kerala Chief Minister and CPM leader Pinarayi Vijayan accused the SDPI, the political arm of radical Islamist outfit PFI, of infiltrating the protests against the CAA and creating division among people over the issue. The Kerala CM also admitted that PFI has caused ‚Äòsome untoward incidents‚Äô in the state. “Extremist groups like SDPI are intervening on these issues [CAA] and trying to deviate the attention from the main issue. As a result, there have been some untoward incidents. In some places, attempts were made to divide people,‚Äù he said.

However, the CPM continues to work hand in glove with radical Islamist elements in CAA protests and using them to instigate the Muslim population in the state. The PFI extremists were seen actively participating in the human chain programme organised by CPM in protest against the CAA.