Dharamshala. The President of Tibet’s government-in-exile Dr. Lobsang Sangay said Ladakh and Tawang in Arunachal Pradesh have always been a part of India.

Speaking to a private channel from Dharamsala, Dr. Sangay said, “The Indo-Tibet border has been in existence for thousands of years of recorded history. Since it has become the India-China border, all these tensions have come up. Hence, the core issue is Tibet. When Tibet was independent, the Indian Army did not require a defence budget of 60 billion dollars, it was not necessary at all. So, once Tibet is demilitarised and declared a zone of peace, two largest populated countries in the world, India and China, will have permanent peace.”

The statement came in the wake of a controversy over former diplomat Phunchok Stobdan’s remarks about Dalai Lama’s silence on Indo-China border tensions. Stobdan’s remarks irked Ladakh monasteries and the Buddhist community.

On the controversial Chinese security law, Dr. Sangay said it will greatly undermine the freedom and democracy in Hong Kong. China’s legislature has recently approved a national security law seen as aimed at reducing the autonomy Hong Kong has enjoyed since rejoining the mainland in 1997 under the “one country, two systems” formula.

He further said, ‘It is clear that in the guise of “security law”, the communist government is trying to bring Hong Kong under its repressive rule. Tibet has gone through this for the last 70 years.’

Hong Kong has been gripped for several years by political unrest  and demonstrations, which has been gaining momentum in recent days after Beijing’s decision to prepare a national security law for the semi-autonomous city, which was passed last week. Article 23 of the Basic Law (which governs Hong Kong) stipulates that the city must endorse legislation on security made by Beijing, something that has always been extremely controversial among the population for fear that it would result in a reduction of freedoms.

The territory was returned to Chinese control in 1997 after a century and a half of British rule, after London and Beijing signed a joint declaration in 1984 under which the UK renounced its last Asian colony. This deal established a series of freedoms in the city for 50 years, many of which do not exist on mainland China.

Though Hong Kong has never been a democracy, Beijing agreed to maintain the modest degree of representative government instituted by the British colonial authorities in the late 1980s as they prepared for the handover of sovereignty to China. But China’s government has shown growing impatience with the existing arrangement following months of sometimes-violent anti-Beijing protests in Hong Kong.

“In 1951, through the 17-point agreement with Tibet, China promised full autonomy. But China violated the agreement. Today Tibet is among the most repressed regions in the world. Hong Kong and Taiwan people are wary that they may face a similar fate as Tibet,’’ Dr. Sangay added. 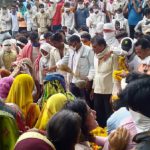