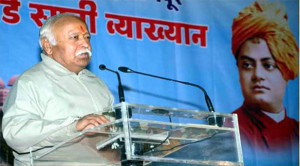 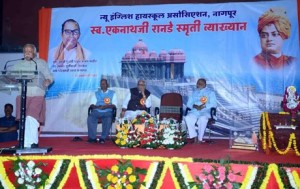 Late Eknath Ranade, who was a student of New English High School, was the founder of Swami Vivekananda Rock Memorial, Kanyakumari and Vivekananda Kendra. The lecture was thus organised by the New Enghish High School Association as a tribute to this past student.

Dr. Bhagwat said that these qualities in late Eknath RanadeŌĆÖs personality were further sharpened and honed properly under the guidance of RSS founder Dr. Keshav Baliram Hedgewar and his immediate successor late M S Golwalkar (Sri Guruji). Emulating his example and following them in our life would be the best tribute to him, the RSS Chief said.

Sharing his views with the large audience that gathered at the open ground of New English High School in Congress Nagar while Nagpur shivered under the impat of 5 degree celcius temperature on the penultimate day of the year that just passed, Dr. Bhagwat narrated a number of incidents from the life of late Ranade. Through such experiences he learnt his lessons for life and drew inspiration to build his personality and positive attitude and thinking, he said. 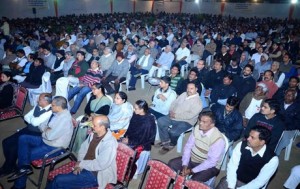 These qualities imbibed by him were put at test during the completion of the Vivekananda Rock Memorial at Kanyakumari and later when he started the order of Life Workers of Vivekananda Kendra, the RSS Chief explained.

Unfolding the history of Swami Vivekananda Rock Memorial and the efforts the late Eknath Ranade took to accomplish this very difficult task, the RSS Chief said that Eknath Ranade managed to convince leaders of all the political parties including the then Union Minister Humayun Kabir and Tamil Nadu Chief Minister Bhaktvatsalam who had shown strong opposition to such a memorial of Swami Vivekananda in the southern sea.

Ameliorating the condition of the people standing at the end of the social ladder was the core of thoughts and actions of Swami Vivekananda and Ekanth Ranade. This same thought is practiced by RSS on a wider canvass, he said.

Ekanth Ranade conceived, and planned construction of rock memorial and completed it with full determination. The initiation of the Life Worker Order to propagate the thoughts of Swami Vivekananda was the next logical step of his mission and today we find hundreds of such dedicated youth working in the remote areas of the country serving the poor, the neglected and the downtrodden taking them to be their Gods.

Dr. Bhagwat dwelt at length on various aspects of Eknath RanadeŌĆÖs life as a student at Hislop College, as a Swayamsevak, as a Pracarak and as a Sarkarywah of RSS till he was entrusted with the responsibility of Rock Memorial in 1962 to highlight the best of his qualities and principles of life.

Strong resolve, working with dedication and determination accompanied with hard work, bravery, and systematic bent of mind he was able to translate his dreams in reality. Having full faith in serving those who are in need, helping them to become self-reliant, grooming them to serve others and dominate the society with such dedicated persons was the dream Ekanth Ranade cherished in his heart and worked relentlessly for its realization.

We all have a responsibility to understand his thoughts and work with the same zeal. This is the best way to pay tributes to this great soul, Dr. Bhagwat said.

Earlier Dr. Vyavahare introduced the guests and honoured them with bouquet and replica of the Vivekananda Rock Memorial. The proceedings were compared

by Rucha Ansighkar while Assistant HM Mrs. Aarti Khandekar proposed vote of thanks. Prior to his lecture Dr. Bahgwat released five volumes of thoughts of Eknath Ranade published by Vivekananda Kendra. Pankaj Shelare, a student of the school, delivered the short lecture on Swami Vivekananda.