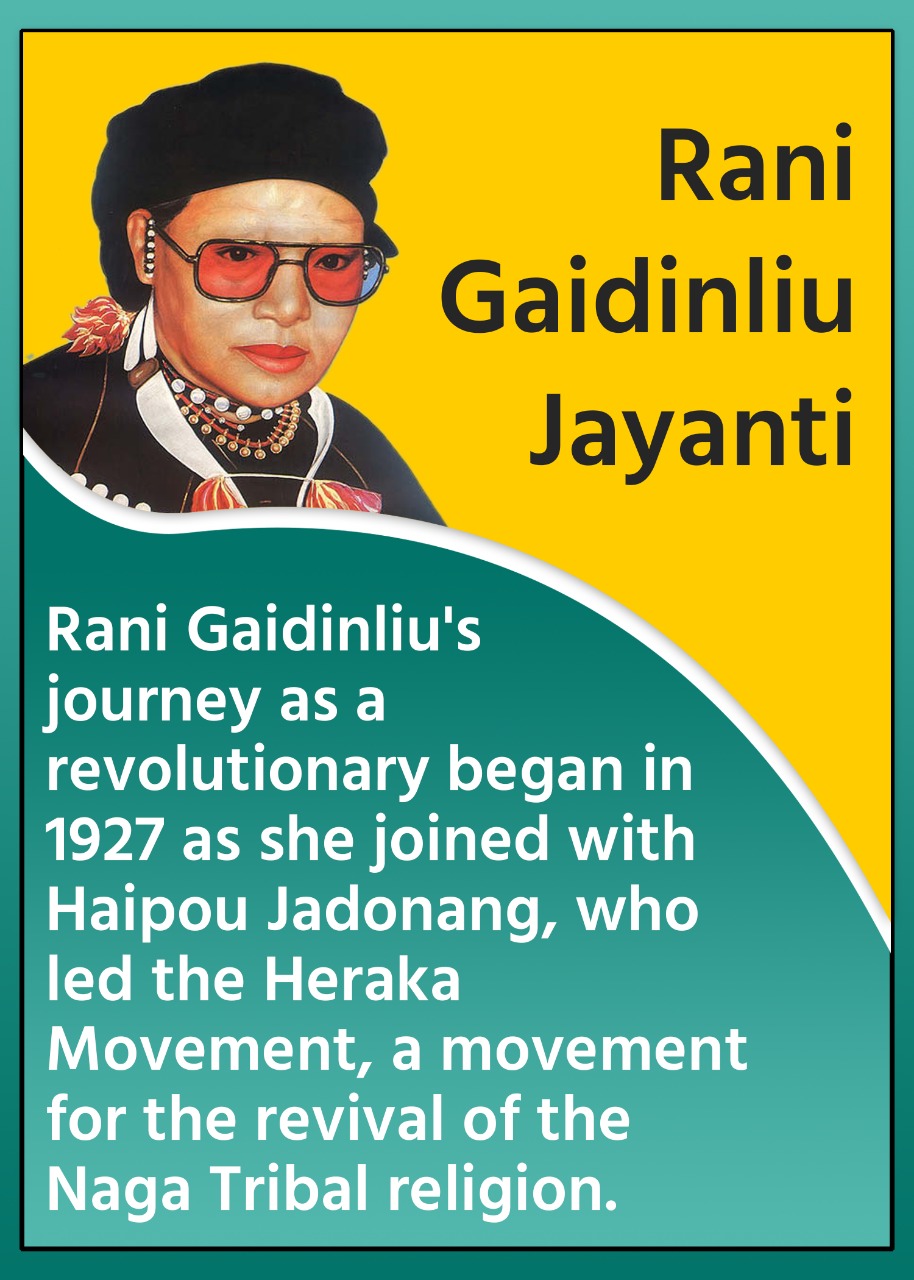 On August 24, 2015, when Prime Minister of India, Narendra Modi Ji, inaugurated Birth Centenary of Rani Ma Gaidinliu, little did most of the Indians knew about this great daughter of Maa Bharati who was a kind-hearted woman who loved her community, identity, culture and left a substantial legacy behind.

North-East. One of the most serene parts of India. Blessed with natural beauty, these seven-sisters of India are well-known not only for the geography but for the glorious history as well. The history, which goes back thousands of centuries, is an integral part of the evolution of our great nation.

Manipur, One of the seven states of North-east, is bounded by states of Nagaland to the north, Mizoram to the south and Assam to the west. It also borders two regions of Myanmar, Sagaing Region to the east and Chin State to the south. There is a range of mountains named KalaNaga which is situated alongside the river Makru, which houses Rongmei janjati. On January 26, 1915, in the small village of Luangkao, Gaidinliu was born in this janjati.

Patriotism is one of the key strengths of every Indian and when it comes to janjati families, it’s the most important part of the upbringing. Although Gaidinliu could not get any formal education due to scarcity of resources, right from her childhood she was a keen learner and observer. The most bothersome part was the imposed British rule which had taken away the freedom of our motherland. Along with freedom, the cultural invasion by the foreigners was a major concern for which most of the janjati were fighting for. That’s when she realized the need to protect the rich legacy and identity of the entire community and understood that everyone needs to stand against this invasion of Britishers & missionaries.

She was deeply inspired by the Heraka socio-religious movement, which was started by her cousin Haipou Jadonang to prevent the aggression of Christianity. This movement later turned into a political movement for driving the Britishers out of India. Around 1927-28, at a tender age of 13, Gaidinliu joined the Heraka movement to protect her identity as well as freedom of the motherland. In 1931, when Jadonang was hanged by Britishers as a part of demolishing the Heraka movement, Gaidinliu was given the responsibility to lead the movement. Within a very short span of time, she encouraged people to protest in every possible way against the invaders and stop paying any tax to them. Infuriated with this, Britishers started harassing people to get the whereabouts of Gaidinliu. They even offered a tax exemption of 10 years for those who will help them to imprison her who was carrying out underground operations against them.

However, no one supported Britishers. In 1932, after the famous battle with Assam rifles at North Cachar Hills, Gaidinliu was arrested by Britishers. She was the first ever and probably the only female prisoner who was sentenced to life imprisonment for the activities carried out against the British rulers.

In 1937, when Pandit Nehru came to know about her contribution in the Indian freedom struggle, he met her in Shillong jail and praised her as “Rani” (Queen of Naga), and thus she became Rani Gaidinliu. Nehru promised to work for her release but Britishers fearing about her revolt, did not release her. Ultimately, with India’s independence in 1947, she was released from the jail.

Even after independence, the challenges in front of the janjati communities still continued and she decided to devote her life for the betterment of the people. She was a strong advocate of traditional Naga religious practices and hence strongly opposed conversion of Nagas to Christianity. During the 1950s, she spent most of the time spreading the Hereka movement in the North-east along with protection of communities from cultural invasion by the missionaries. However, to counter the terror acts from Naga National Council (NNC), she once again started an armed revolution to save her community and built her army of around thousand armed fighters. Her battle against the forceful religious conversion continued for several years during the 1960s. After an agreement with the state government in 1966, she surrendered along with her hundreds of soldiers and spent the rest of her life serving the janjati communities.

Around 1978, Vanyogi Balasaheb Deshpande, the founder of Vanvasi Kalyan Ashram (VKA), met her in Kohima and explained about the activities being carried out by Kalyan ashram for upliftment of janjati across the nation. Rani Maa was overwhelmed to know the work being carried out by Kalyan ashram and advised VKA to work for educational requirements of Naga girls & boys. Accordingly, Naga students were admitted in different schools and hostels in Raipur, Gorakhpur, Delhi, Nagpur, Rudrapur etc. Her involvement in VKA activities started increasing with more focus on education of girls. In 1985, she was the chief guest of the first national conference held for janjati women at Bhilai.

She continued to mentor VKA activities and was a strong pillar for institutionalizing the importance of education & cultural preservation in North-east India. Till her last breath on February 17, 1993, she continued to work for protection, preservation and promotion of the janjati culture. 2014-15 was celebrated as Rani Gaidinliu’s birth centenary year. In honor of Rani Maa’s contribution to the Indian Freedom struggle as well as protection of the janjati identity, Vanvasi Kalyan ashram celebrates 26th January as “Nari Shakti Divas”.

She was conferred “Tamrapatra Freedom Fighter Award” in 1972, the Padma Bhushan in 1982, the Vivekananda Seva Award in 1983 and Stree-Shakti Puraskar. She posthumously was awarded the Birsa Munda Puraskar in 1996. The Govt. of India also issued a stamp in her honor. The Indian Coast Guard commissioned a Fast Patrol Vessel “ICGS Rani Gaidinliu” in 2016. In 2015, the Centre, on her birth anniversary, issued commemorative coins of Rs 100 and a circulation coin of Rs 5 in her honor. In September 2021, the Manipur Government announced its decision of renaming the Kaimei Railway Station into ‘Rani Gaidinliu Railway Station’.

On Rani Gaidinliu’s 108th birth anniversary, tributes to this true Indian nationalist, under her leadership, nationalism based on traditional culture emerged as an alternative force to the NNC-dominated Naga nationalism based on Christianity and Western culture. The real tribute to Rani Ma Gaidinliu would be to continue preventing all sorts of invasion on our great nation and work devotedly for the progress of janjati communities. Let’s cherish and follow Rani Ma Gaidinliu’s vision for protection, preservation & promotion of janjati culture because “Loss of religion is the loss of culture and loss of culture is the loss of identity”.