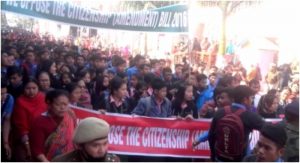 Aizawl. Dragging students in political rally, the Church schools in Mizoram have stooped to a low level. As the North east states oppose the Citizenship Amendment Bill 2016, the streets in Mizoram saw huge massive rally of school students protesting against the bill. In this regard, the Legal Rights Observatory approached NCPCR (National Commission for Protection of Child Rights) to urge stringent action against Church run schools for violating Juvenile Justice Act.

In the letter addressed to NCPCR, LRO highlighted that through the YouTube video school kids of numerous Church run schools from Mizoram capital Aizawl were forced to participate in political protest rally organised against Citizenship Amendment Bill- 2016. This was not the first time though, earlier also various Church run schools from North East India were found guilty of forcing school kids into political agitations and street protests, for which NCPCR has punished them in an exemplary manner.

With this email Legal Rights Observatory- LRO requests NCPCR to order investigation of the incidence and to seek report from Chief Secretary and state education secretary regarding this incidence and to punish the guilty school authorities in this regard under Juvenile Justice Act.

The North east states have been opposing the Citizenship Bill ever since it was passed in Lok Sabha. Many protests have been witnessed in the seven sisters state but the school kids forced in political rally levels down the stature of the schools and also manipulates the minds of students. 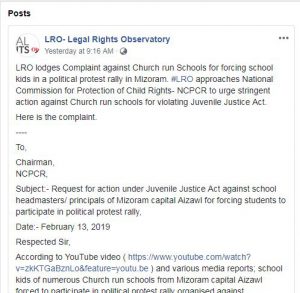 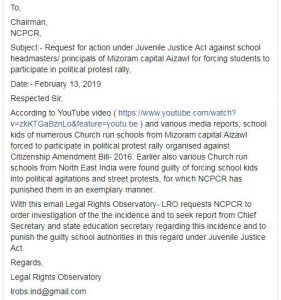