Mumbai. A total of 6,852 children died in Maharashtra due to malnutrition in the last three years, the Bombay High Court was informed by the State government on Monday.

Out of that, 601 children who passed away were born to minor mothers, the report submitted by the State government said.

The figures formed part of a report submitted by the State in compliance with the order dated March 14, 2022 by which the High Court had directed district collectors and magistrate across Maharashtra to conduct a survey and identify areas where the instances of child marriages are prevalent.

It included figures collected for a span of 3 years from 2019 to 2022 from 16 tribal districts of Maharashtra.

The survey was conducted by Anganwadi Sevikas and ASHA workers. The report further said that over 1.36 lakh children are affected by the malnutrition in the State out of which over 14,000 children were born to mothers who were minors.

The report also highlighted that a total of 26,059 children were severely affected by malnutrition and 3,000 of such children were born to minor mothers.

There were over 1,10,674 children who were moderately affected by malnutrition and about 11,652 children were born to girls who had not attained the age of 18 years.

A Bench of Chief Justice Dipankar Datta and Justice VG Bisht was hearing a PIL raising concerns over malnutrition deaths in tribal areas of Maharashtra. 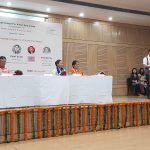