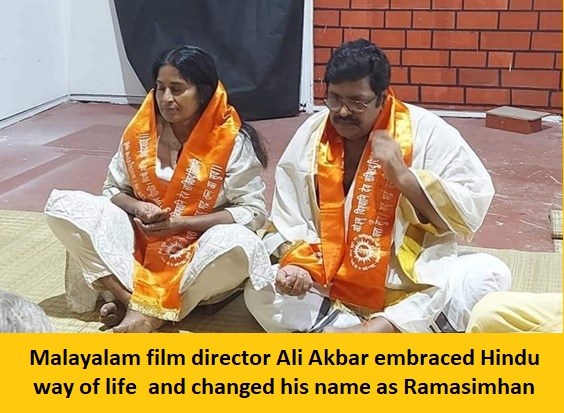 Kerala. Malayalam film director Ali Akbar and his wife Luciyamma embraced Hindu way of life on Thursday in a shudhi function. After his admission to the Hindu fold Ali Akbar changed his name as Ramasimhan.

Earlier, he announced his intension to renounce Islam and join the Hindu fold using his facebook page. He made this decision when some people (predominantly Muslims) posted smiling emoji’s to mock the death of CDS Bipin Rawat.

In Kerala Ali Akbar was also in the news when he announced a film on 1921 Malabar Hindu Genocide. He sought the support of public for the production of this film and many people extended a helping hand to make the film a reality. Ali Akbar faced various kinds of bullying and threats in the name of this film. Ali Akbar is also an active face in Malayalam TV debates.

In a Facebook live Ali Akbar told that he is renouncing religion he got by birth and hereafter himself and his family will live according to the Bharatiya Sanskriti.

Interestingly 8 decades ago one Unnian Sahib and his family renounced Islam and embraced Hindu way of life in Malabar and the name assumed by Unnian Sahib was Ramasimhan. Unfortunately, a fanatic mob attacked the house of the then Ramasimhan alleging apostasy and killed him and his brother. Further, his remaining family members were forcibly taken to some unknown location. This incident took place just few weeks before India’s independence. It seems Ali Akbar was assumed the name Ramasimhan keeping this incident in mind.