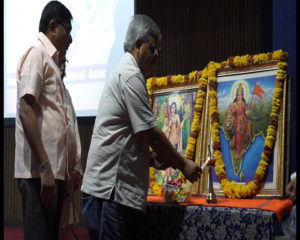 Hyderabad (VSK). Umesh Upadhyaya Ji, Director of Media Branch of Reliance Group of Industries said, “In the present fast changing scenario of news media only those organisations and media houses who have social values, trustworthiness and commitment will be given importance in the future.” Speaking on the topic “The Future of Media”, at a function organised by the Samachar Bharati Cultural Association at Osmania University in the Mekaster Auditorium to felicitate Journalists on the occasion of “Narada Jayanti”, he said the role of a journalist was to remove the evils in the society by his pen, like a surgeon who precisely cuts off the organ which is spoilt.

The aim of the media is to provide the news to the public. The media is expected to present the news as it happened and not to create a news for any incident. Earlier, it used to take over 15 hours for any news to reach the remote villages, but now due to technical development, it’s reaching instantly through smart phones and other means. In future, the narrative given by the news item will be judged. He said the aim of the media houses is to carry the news to the general public. In future, it could be achieved by sending the news video format which can be shared through smart phones.

A small tweet leads to many changes in the society, he said. Every citizen is turning into a journalist thus showing the strength of pen. It is necessary that the work of journalists is trustworthy, he opined. He gave several examples where mobile phones turned into news agencies. Those journalists who report the news without any bias will be respected. Sage Narada who worked for the benefit of the universe should be followed as an ideal example by the journalists. 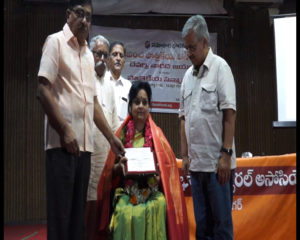 Dr. Papi Reddy, Chairman, Telangana Higher Education Council, said that media has become an important tool in this modern society and keeping this in mind it is necessary that correct news reaches the public. Whenever the society faced any troubles Sage Narada played a very important role in solving them and similarly, the journalists should also play their role.

He felt that the way in which news is being presented by newspapers and the media is very painful. It is becoming difficult for journalists to report the facts. He hoped that this will change in near future. He expressed hope that the media will come out of clutches of political and castiest influences and work in the interest of public and stand by them.

Speaking on the occasion Annadnam Subrahmanyam Ji, Telangana Prant Sah Karyavaha, Rashtriya Swayamsevak Sangh said that Bharat has guided the world not only in spiritual matters but also in other areas. Devarshi Narada explained the way in which news should be transmitted to the general public and this is the reason for celebrating Narada Jayanti.

Rammohana Rao who received the award said that it has given him a great pleasure to receive the award and that in his 35 years long service analysing the report which would be the news and which would be not was the first step. 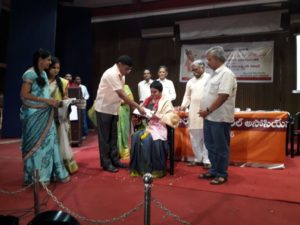 Usha Thuraga Revalli who was presented the Bhandaru Sadashiva Rao Memorial Award said that presently there is a lot of internal conflict going on in the society and in the midst of this, the social media will play a very important role and that it should be put to good use.

Govinda Raju Pendam was presented with the Samachar Bharati Best Photo and Video Journalist Award. He said that receiving this award has him a great impetus.

Devika Rani, who was presented the Samachar Bharati Ujwala Yuva Award said that such awards will give encouragement to young journalists.

Nadimpalli Ayush gave a detailed explanation of the events being conducted by the Samachar Bharati Cultural Association. 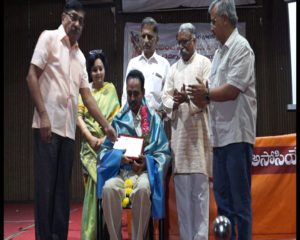 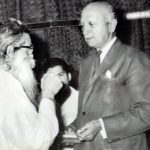