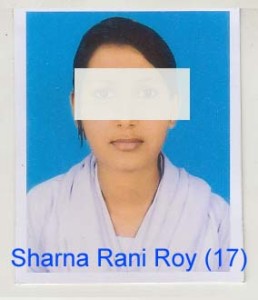 On 19th of September, 2014  at about 9 a.m.while Ms.Sharna Rani was going towards her Al-Razi Women’s College one Mohammad Zishan (24) son of Israfil  residing at  Nasirabad, Tekkpara, P.s. Khilgaon, DMP –Dhaka  along with other 4-5 unknown perpetrators who were watching victim and  kidnapped from Kayetpara Trawller Ghat  showing pistol to convert her into Islam. The victim cried but bobody came forward for her protection and they decamped.  Liton Roy – uncle of the victim filed a general diary Number 996 dated 20.10.2014 at Rupgonj police station, but police did not take any positive action to trace out the victim.

Thereafter the father of the victim lodged first information report (FIR) being Rupgonj P.S. case No.24 dated 17.11.2014 under section 7/(30) of Women and children Repression act, 2003 against the perpetrators with the help of Bangladesh Minority Watch (BDMW).

Bangladesh Minority Watch received an appeal from the mother and father of the victim girl –on 17.11.2014 requesting BDMW for taking steps to rescue the girl from the possession of the perpetrator. BDMW requested O.C. Rupgonj Police station to take necessary steps to rescue the victim girl and accordingly specific case Number 24 dated 16.11.2014 has been started against the perpetrator. 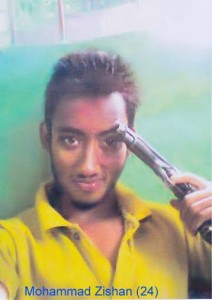 A BDMW office bearer also talked with Md. Anisur Rahman- Sub Inspector of Police, Rupgonj over phone who was entrusted with responsibility to trace out the victim. Mr. Anisur told that the victim surrendered before the court and got bail with the perpetrator. BDMW also procured a photo of perpetrator (terrorist) with Pistol who was   tagging on his head.

Bangladesh Minority Watch is very much concerned about negligent attitude of the police officers to rescue the victim.

After thorough investigating the case, BDMW demands that the victim should be brought before the court for ascertaining the age of the girl, Impunity to perpetrators of crime against humanity should be stopped and Minorities should be protected as per General Assembly resolution 47/1135 of 18 December, 1992.

showing pistol to convert her into Islam 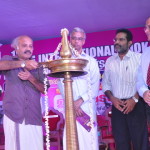 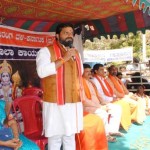